Another sleepless night, but I’m going in late today because of an appointment. I like the occasional extended at-home time. I’ve read a lot since 3 this morning, before getting some studying done.

Another chapter in Joaquin Phoenix’s car crash of a rap career and/or prank-ish Andy Kaufman-style art project was written last night. While performing at a Miami Beach club the heavily bearded Walk the Line star became upset at an audience member and jumped off the stage. The ensuing mayhem can be witnessed below. Footage was also, once again, captured by Casey Affleck who has been documenting Phoenix’s unlikely new musical career, leading many to conclude that the whole thing is some sort of elaborate practical joke.”

Gee, ya think? Of course, several videos have been pulled because of “copyright violations.” Riiiight. That’s because Casey boy is going to make a movie about all this nonsense. *yawn* Next…

This is amazing. And awful. Advance through the pictures and watch the expressions on the men’s faces. 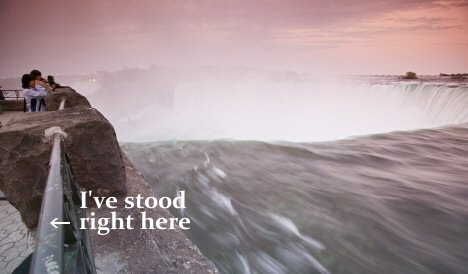 Now there are some nasty ways to put an end to one’s own life, I’ll grant you. But I must say that jumping over the railing into Niagara Falls has to rank right up there in my book. Have you ever been there? You can’t imagine the power of that water until you stand at that concrete and steel railing and peer over the edge as the water rushes over the cliff. It’s both mesmerizing and horrifying.

Anyway, imagine watching someone do this right before your eyes. What would you do? I would freak. I’d run around in a circle like Chicken Little. Creepier still, the guy reportedly refused help from rescuers. Very sad when someone’s that despondent.

Finally, a real shame. More and more newspapers are shutting down. I am one of the reasons, I admit it. I read my news only online, even though I subscribe to my local newspaper (the Thriller reads the physical paper; I access it only through its website). But people get lots of news everywhere for free, so of course the local publishers are feeling it bigtime. And I don’t mean just the small-town dailies; the crunch is smashing the big boys, too.

And another facet of Americana hits the skids in the name of progress.

OK, back to work. Happy Friday the 13th. Be careful out there.