It was a hot one. Like seven inches from the midday sun.

Yesterday was quite the day to walk Salem and go see the Lexington and Concord battlefields. Nothing wrong with traveling on foot uphill in a breezeless sauna, mind, but it was admittedly a challenge at times. Still, it didn’t dampen our spirits too much (but the Thriller’s t-shirt…that’s another story). 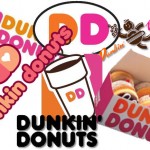 Another brief diversion here for some unfinished business. We had a fantastic time with our nephew Jeremy the day we left Mystic, CT. Fun! We even got him to pose for a photo or two before we parted ways. It was wonderful to see him, and we know his mama Mavis misses him terribly, too. 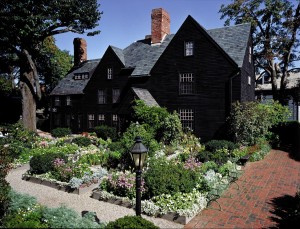 But on to the House of the Seven Gables. What a fascinating place. After breakfast, we took the official tour, and loved it. One strict rule is that they do not allow photography of the interior of the home. But as anyone who can access Google Images will tell you, there are always exceptions, so I’m providing some here to give you an idea of how wonderful this place is. (Truly, I wish they would allow photography; I think it would encourage people to visit way more than it would spoil any mystery.) So not all of this photography is mine. 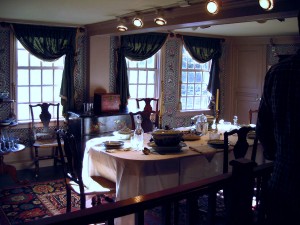 The house is actually a mansion of the day. With the main part of the structure built in 1668, it’s also the oldest surviving wooden mansion in North America. Perhaps the most interesting aspect of the tour was seeing how “rich” people lived in the late 17th century.

Some of the furniture is original, which is really impressive. A piece of the original 1668 wooden front door is mounted behind Plexiglass. The walls and floors have been painstakingly replicated to preserve the feel and appeal of the house’s history. 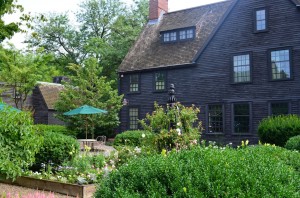 Back of the house, and gardens
Of course, the big draw at the house is what has become known as the “secret staircase.” For many years, researchers  believed that the staircase was a “keep,” similar to what a certain Witch Trial survivor built in case prosecutors changed their minds after he was allowed back in Salem. Later, it was thought that slaves were protected on the Underground Railroad by way of the hidden staircase in the house.

"Secret staircase"
In 2006, documents were unearthed and the truth was revealed: the “secret staircase” wasn’t secret at all, but rather built in 1910 when original plans for it were discovered. So, while not quite as intriguing, it was still fun to go up. The steps are reeeeeally narrow, though. Everyone had to move sideways to get around the corner turn. And it’s definitely not for the claustrophobic; a few skeeved-out tourists chose to take the regular staircase.

Yesterday was not only the 4th of July, it was Nathaniel Hawthorne’s birthday, so they made a big deal of it at the Seven Gables house. We missed the birthday cake celebration, though. We did, however, get to tour the house in which he was born.

After we finished with the tour and some shopping and sightseeing in the historic district, it was time to schlep it to the Lexington and Concord battlefields.

Truth be told, after Gettysburg, it was a bit of a letdown. Not near as much interaction. Of course, the Revolutionary War took place a hundred years before Gettysburg, so there are far, far fewer extant relics, but I guess at that point, we weren’t much in the mood for walking the 5-mile trail and using our imaginations. So instead, we hit the major parts of the trail and walked historic Concord. We tried to go to Walden Pond to live deliberately for a while, but it was temporarily closed. Boo.

By the time we got back to the hotel, we were just about wrung out. So we cleaned up and rested, went out to dinner, and stopped at Ben & Jerry’s in Salem for dessert. When we returned to the room, the Thriller turned on the television and found, to his utter delight, that the White Sox were playing the Rangers on ESPN (and they won, too, which makes my world a happier place, to be sure). How about that? His night was made, and I got on the computer awhile, then read my Nook. A good end to a crazy day.

Today, we’re rested and ready to take off for Maine. We should arrive in Bangor by noon. Off we go! Hope you all had a great holiday and managed to stay cool.

Aww! I sure do miss his face!!! Thanks so much for the picture, Bird. He looks great! The Thriller looked good, too! I miss that kid so much. Wow. I would have LOVED to see the inside of the Gables house! I want to live in it! Such interesting history. How lucky you both are to be able to see such things! I’m sure you’re both having the time of your lives. Such a boon that Thriller could see a WS game! Great ending to a fabulous day. Enjoy Bangor! Love you both! ReplyRat Fink Reply:July 5th, 2012 at 9:43… Read more »

Sounds like a tiring but interesting day. I have not read that Hawthorne book so I had to wikipedia the house. It sounds worth reading and checking out. I don’t think I would have enjoyed that staircase very much. It looks cool, but it also looks like some claustrophobia nightmare steps I’ve dreamed about. I saw a scene depicting the aftermath of the Lexington and Concord battle while viewing John Adams last night. I’m not sure if they shot at the actual spot or not but it didn’t look like much compared to Gettysburg. It would have been cool to… Read more »

*dunkin (what was i thinking)

“We tried to go to Walden Pond to live deliberately for a while, but it was temporarily closed. ” Why this made me laugh so hard, I do not know, but thanks for it. Looks like you two are having a great time. And yes, the Dunkin’ Donuts thing is nuts – not that I would be complaining at all! ReplyRat Fink Reply:July 6th, 2012 at 6:34 amHaha. Glad I could give you a giggle. I’m sure you were mainly laughing because you know in your heart I’d never ever do what Thoreau did! We are having a great time,… Read more »

Chicago is the same way. Both Dunkin’ Donuts and Subways everywhere.