OK, this is going to take some of us a long way back. And seeing as how I’ve been up since 2 a.m., I’m in the writing mood to tell you about it. 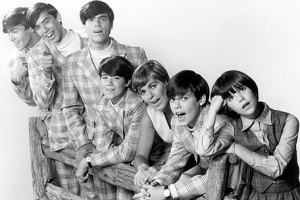 Yesterday, while listening to the 60s station on Sirius radio on the way home from school, I heard an old classic by The Cowsills, called “The Rain, the Park, and Other Things.” I was immediately lost in memories. The lyrics knocked me out, even as an elementary school student. The song tells of a young man who encounters a beautiful girl at a park during a rainstorm. When the rain stops and the sun breaks through, she disappears, leaving him with only a single flower from her hair. I loved the romance of it — still do. Here’s a clip from it.

Wow. First of all, the song is beautifully sung: in tune, with gorgeous harmonies and impressive style — especially since these were teenagers and their mom. I remember seeing them on some variety show when I was about nine years old, and wishing like heck I could be Susan (the youngest, who is my age). It looked like such amazing fun, fronting a band of older boys, and holding a tambourine. Here is an absolutely delightful video from the Johnny Cash Show in 1969. (“Monday, Monday” was lazily lip-synched, but fabulous nonetheless.) I wanted desperately to stand up there and dance and sing like Susan.

Their family story is both wonderful and tragic. They were the inspiration for what later became the Partridge family of TV fame. The Cowsills were approached first by producers to star in a sitcom about a musical family, but they wanted Shirley Jones to play the part of the mom instead of Barbara, the children’s real mother. Bud Cowsill, patriarch and also the group’s manager, balked, and refused to let the kids do it. 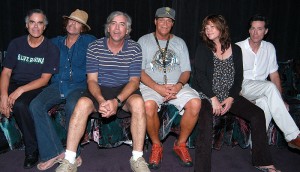 They went on to have several memorable hits after “The Rain, the Park…” Two of my favorites are “Indian Lake” (arguably about the lake of the same name in Logan County, Ohio — they were from Canton) and “Hair,” their risky 1969 break from bubblegum, which went straight to #1. And did you know they also sang the theme to the popular — and then quite racy — 70s sitcom, Love, American Style? (I watched it every chance I got, when my parents weren’t around.)

But time marched on, and they ended up going their separate ways. A couple of them have died, as have the parents Bud and Barbara. Most notable was the death of Barry Cowsill, who drowned during Hurricane Katrina. The last words his family heard from him before he went missing were recorded on his sister’s answering machine as the storm bore down on New Orleans:

Apparently, Susan has kept performing through the years, and is quite active in the New Orleans Americana music scene.

Do any of you remember The Cowsills? Bet ya do.