It’s Dad in his new toy!

Happy Father’s Day to all the papas out there. I say there’s no time like the present to lobby for your 2010 gift. Presenting…. 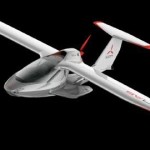 The ICON Aircraft A5 — JetSki to the Skies.

And, according to the Light Sport Aircraft section of the FAA flying rules, you don’t even need a physical to fly one of these babies. All anyone needs in order to take off is 20 hours of training and a driver license.

However, at 18 MPG and flying on either jet fuel or gasoline, Dad better really, really want to fly. With roll-out planned for sometime in 2010, you can start saving money now to buy him this futuristic airplane made to feel and “drive” like a car, right down to the analog controls.

Speaking of futuristic travel, you absolutely have to watch this video. Made by Disney in 1958, it predicts what travel will be like in the “world of tomorrow.”

A couple of the predictions are actually pretty close to what’s happening now and what stands to happen soon. The rest of it’s basically nutty, but watch it — it’s worth the loadtime and you’ll get a kick out of it.

(I especially liked the part where the car drops “Father off at the office, and Mother and son to the shopping center.” Heh.)