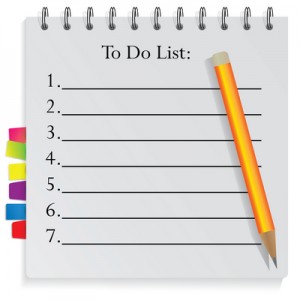 I think I need one. It’s my first official day of summer break, and I’m experiencing the familiar jittery feeling of being “at sea.” Adrift. Purposeless. Confused about which thing to do next.

J’ever get that way? Each time I’ve tried to make a list, it’s ended up in varying stages of mild success to abject failure. I grow tired of the list, I lose the list, I start the list over again, or I simply ignore it. Why am I so disciplined in other areas of my life, but in the areas that really count (to me, anyway), I’m terrible?

I’ve always believed it’s a matter of self-discipline, and shame on people who can’t control it (e.g., me). It’s somewhat of a self-fulfilling prophecy merry-go-round at times:

Still, I do not give up the fight. I could just, say, not make a list and simply attack the jobs that need to be done as I think of them. Hmm, I guess so. But I’m lazy, I think. I’ve discussed this phenomenon with the Thriller on many occasions. He calls me a “big picture thinker,” as I struggle with breaking down big tasks/concepts into little pieces (lists?).

For instance, I’ll think to myself, I have got to clean this house, ARG! Yikes, huge task, and I’ll often say, “Well, I’ll clean this house later — for now, I’ll read that article.” If I ignore it, it goes away, see? I need to just buck up and get going. I’d rather write a 20-page treatise on the dangers of GMOs in our food than iron those blouses or clean the bathrooms.

All right, stop complaining. I have to go make a list. What goes on it today, I wonder? I know: everything. Just do everything.

Ha, I just had this same conversation with… well… “Heffe the Hubby”, now. I’m not in school for another seven or so weeks and TCO is off till July. I keep thinking “I have all kinds of time!” — so, I try to write a blog, spent most of the weekend on throwing away things in the garage, and decided that we’re gonna make this condo work for us… so then we ripped apart every room, took out parts of the closet, hung the TV up in the bedroom and finally, after two and a half years, realized that we… Read more »

Sounds like your summer is filling up fast! I didn’t know you we’re a DM fan…

The DMB tickets I bought for Heffe as a wedding present. Looks like it’s gonna “severely” thunderstorm in Akron that day. Ha. Oh, well. It’s the thought that counts, or so I’m told.

I’m excited about the opera, though. I didn’t think you’d be in town to come up to the Ohio Theatre to see it.

1. Obsess about writing a list and end up not writing one.

Cross off number one and ENJOY that time off! Are you kidding me???

Hey, be nice, Miss Sarcasmo. I do enjoy my time off, but I don’t enjoy struggling with my organizational disability.

Hmm I hardly think you are dis-organized Little Missy

Thanks for the mail I will answer tomorrow! Way to go youse guys!!

Umm…also add to the list:
Enjoy a scrumptious lunch over the summer with Abe, Stoney, and Wendell.