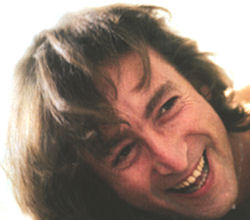 That’s how I remember it.

On 8 December, 1980, I was pacing my living room floor while watching a football game, with a sleepy six-week-old Seamus in my arms, when the news broke sometime in the late evening. Howard Cosell said something like, “It’s hard to go back to the game after reporting this.”

Strangely though, I remember nothing else about that night, except the tears that followed.

Those who know me know that the Beatles — John Lennon, especially — occupy a deep, private, important place in my heart. Heck, my soul. Their music spoke to me first in the late 60s, as a confused pre-teenager. I knew their earlier songs because my aunts used to play their records when they’d come to babysit Mavis and me. As I got older, I delved deeper into their stuff, and before long, I knew (and eventually owned) all of their mainstream albums.

But John’s voice and lyrics always held the top drawer space. There is no voice on the planet like his, although his son Julian’s comes pretty close. I can’t believe it’s been 30 years.

Speaking of dying: that’s what I felt was going to happen last night. I was closing up my classroom around 8:45 p.m. to go home after watching the first half of the  basketball game. I forgot about the presence of a big cinder block, which I sometimes use to prop the door open. I tripped over it and went down, hard, on my hands. Everything in my arms went flying. The good news: I can type this morning. As long as I don’t put any downward pressure on my right hand — like, oh, trying to play the piano or move the gearshift in the car — I’m fine. Today’s rehearsals should be interesting. Oi.