Say what you like, but it won’t change the truth. [Just like my ranting about it won’t change it.] Once again, the consummate arrogance and sheer stupidity of some pro athletes overshadows any positive force the genuine leaders display. The levels of spoiled-bratism in the NFL, MLB and NBA have risen to such ridiculous heights, even sports writers and commentators who’ve “seen it all” are raising an eyebrow.

The list of perps is too long to include here. It’s a shame in the first place that the list is long, but let me predict right here and now that it’s only going to get longer. Epidemics work like that. Anyway, here’s a taste: 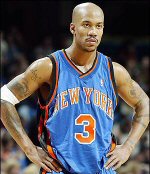 If you have a beef with your employer, refusing to go to work and making your colleagues pull your share of the responsibility is not the way to handle it. So what if Stephon has issues with the way he was being handled by the Knicks? Take care of that business during the daytime, but go to work and “tough it out” for $190,000 a night with your mates, regardless of the picayune details that seem crucial to you. At a time when people are losing their jobs in record numbers in this country, behavior like this strikes a particularly sour note. Get over yourself and do your job.

After crossing his arms and planting his butt on the bench in Boston because things didn’t go his way, the Red Sox paid him $7 million to leave. Poor Manny.

But hey, look at the bright side. He won an award. He and fellow ding-dong Roger Clemens were top contenders for the 2008 Gobblers.

Well you can’t blame a guy for trying. I mean, I’d hate to have to work on Thanksgiving Day. Being an incredibly highly-paid school teacher, I revel in getting that day off.

Allen apparently didn’t appreciate having to work on Thanksgiving Day, so he just took the day off, without calling anyone. At least he apologized for it later (but come on, admit it: it’s always easier to ask for forgiveness than for permission).

Bottom line, Al: if you don’t like the work schedule, get a different job.

OK, cut him some slack. He showed up late to a Bengals team meeting. Come on, he was tired. So he sat there in the chair and slouched like a pouting 5-year-old, and when he was told repeatedly by a coach to sit up and act like a man, he got up and left, earning himself a one-game suspension. Boo hoo.

All joking aside (was I joking?), it’s uncanny how out of touch some of these guys really are. You’d think that, since most of them came from (at best) regular, working-class families, they’d have a bit more perspective. And I know all about having money thrown at them from all sides, the instant riches and everything that goes with it, blah, blah…but somehow, all the “coaching” these young players get from their betters regarding on- and off-the-field behavior doesn’t quite sink in with many of them. Offending fans with cosmically stupid statements doesn’t seem to bother them, either. From a great article in the Baltimore Sun:

“I got my family to feed.” — former Timberwolves swingman Latrell Sprewell, as he turned down a 3-year, $21 million extension in 2004.

“When you’re rich, you don’t write checks. … Straight cash, homey.” — then-Vikings receiver Randy Moss in 2005, about how he would pay a fine for mooning Packers fans.

“It’s a sad day for me. Our paychecks will be cut in half.” — Vikings defensive end Jared Allen, after Obama’s election. (?????)

“If I wasn’t making so much money, the fans would show a little compassion. … It would be a blessing to be a typical jock.” — Giants pitcher Barry Zito.

You’re right there, Barry. You would be blessed. I know a lot of “typical jocks” who aren’t selfish, whiny brats, and who have their self-worth and perspective completely intact.

I know the bottom-liners out there will say it’s the American way, or it won’t change until fans don’t go to games anymore, etc. But truly, we’re too far gone for that. Pro sports are hard-coded into our nation’s DNA. I myself am guilty of their propagation. It would be nice if nobody talked, wrote or cared about sniping, swaggering, selfish athletes, but that’s not the reality.

What is the reality is this: I need to start studying. Today. Have a relaxing Sunday, all. Did I mention I don’t have to go to school tomorrow? It’s Deer Huntin’ Day! Yaaahoo!

Fink, happy to teach in the boonies (actually, just happy to have a job at all)

5 thoughts on “Leagues of extraordinary egotism”