Finally, it arrives. The day of my last performance of the year. Huzzah! And our non-air-conditioned high school gymnasium won’t be too much of a sauna, as it’s supposed to be 65 and sunny today. Huzzah! Two tunes, then schoooool’s out. For. Summah. 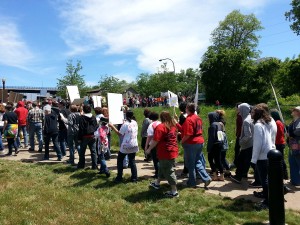 The march to downtown Akron

Yesterday’s Monsanto rally was excellent. We heard some great speakers, one of whom began her speech with the phrase “I am a GMO.” Her father was a Vietnam veteran, repeatedly exposed to Agent Orange, the Monsanto concoction sprayed as a defoliant in the jungles of southeast Asia. The soldiers were reassured by the government (through the Monsanto folks) that the chemical was safe; that it only denuded the vegetation so as to make it difficult for the enemy to hide. Consequently, they were not given any kind of protective clothing, eye shields, special showers afterwards, nothing. We all know what happened next.

So, back to this girl. She was born in 1972 with webbed hands and foot, and with her left leg missing from the thigh down. Her family’s claim against Monsanto and the military — along with the claims of thousands of others whose maladies have been traced back to Agent Orange — have been hung up in red tape for 40 years.

But there is hope. Millions marched yesterday, worldwide. It certainly won’t affect Monsanto’s profit margin — at least not yet. But the prospect of what they want to do for the future is frightening, and we have to do whatever is necessary to bring it to light. If they want to make their poison, fine. But they should be required to label it as such.

OK, on to summer. It’s almost here!  Seventeen days till we leave for the Odyssey. I hope to fill them up with fun, sun, family, friends, and oh yeah, finally getting around to that “spring cleaning” thing. Oy.

What’s up for you this Memorial Day weekend?