Its opening solo trumpet theme has become one of the most familiar pieces of music from any film score in history:

The Hollywood Reporter described it as “so instantly recognizable that an audience could probably identify it simply from the melancholy sound of its first sustained vibrato trumpet note.” Perhaps that’s why they placed it at #1 on the list of their “Top 100 Film Scores” of all time. Cool.

And even though I’ve watched the penultimate scene on the opera house steps a hundred times, I still bawl. The three weirdos who came to my house to watch it with me didn’t seem to mind, though. Zany creatures, they: 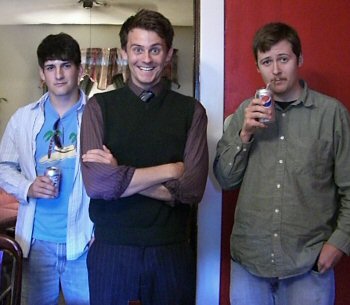 The pizza, the movie, the conversation…all good.

Fink, to the showers and then the school house

Who the heck are those freakjobs?

I don’t know, but don’t think you’re fooling anybody by that silly posting name, Abraham Lincoln.

You can only truly grasp the silliness quotient by being here, Suzi…yeesh!

oh mah gawd…what a gang ya have there. Yikes.
Looks like a mighty fine time was had.

Yep Meggles…only one missing was you!

Gurl – I wanna party with you – you hang with some cool peeps!!!

Sorry I’ve been absent all week, but have been in the bowels of western Virginia for several days for work (with no cell phone service & crappy Internet at best). Glad to be home – only to have to return to VA next week Tues – Fri (but at least I’ll be near VA Beach

Sweetness! I wondered where you’d gotten off to. You can come and party with this old girl any day, darlin. I gotta have something better than western Virginia to offer you!

I’m going to be in Tiffin all week this coming. You ever been to TU while you lived up here?

Nope…can’t say that I was ever in Tiffin. Didn’t even know they had a U!!

I can’t wait for you to get your MB!!! I’d send you a ticket to come to the big D for a weekend of MacGeeking but I know how you are about them there flyin’ machine contraptions….

Abe wears his mustache above his lip. I wear mine on top of my head, along with the rest of my hair.