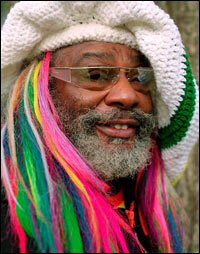 Go ahead. Name any R & B artist since 1970, and any rapper. They all have one thing in common. They have George Clinton to thank.

Spacey, loopy, crazy, confusing, but amazing George Clinton. You don’t need to understand him; one doesn’t question the Georgeness of a thing. You just nod and say, “Yep. That’s where the funk comes from.”

And what is “Georgeness?” Here is Clinton’s response when asked in a 2006 NPR interview to describe exactly what he does:

“Psychoalphadiscobetabioaqua- doloop — the art of dancin’ underwater and not gettin’ wet. That’d be my job…”

And there you go. That’s his job. Well, that, and living out the effects of an awful lot of weed over the years. Seriously though, he is the undisputed king of funk — the music that gave you your rap and hip-hop artists. George says you’re welcome.

He seems like he’d be a lot of fun (albeit completely perplexing) to talk to. I’ll bet his concerts are cool — maybe Lars can weigh in on that, since he’s been to one. Clinton has like 30+ people in his band; not even he knows them all. I’ll bet *you* could steal away on the bus, grab a trumpet, and just stand up there and pretend…and no one would know the difference. Heh. That would be the Georgeness.

My favorite Parliament/Funkadelics tune is “Flashlight” – here is 30 or so seconds of it. Clinton’s music is heavily sampled, and has been for decades by ____________ (fill in the blank with just about any rapper since 1990). I don’t know how many artists have sampled this, but now you know where it originated.

His concert was amazing, probably had 30 different musicians on stage through the course of the evening. They played for the good part of two and a half hours and only managed to play like seven songs. The highligh of the night, by far, was the 28 minute version of flashlight. The diaper clad guitarist was front and center, of course. I would highly recommend seeing them if they come to a town near you… however, definetly a show to leave the kiddies at home.

Georgie and the P-Funk All Stars. Wow, what an inspiration to half of the bad crap they have on radio today…