kar·ma n. The total effect of a person’s actions and conduct during the successive phases of the person’s existence, regarded as determining the person’s destiny. ~American Heritage Dictionary

It may come as no surprise to you that I’ve been thinking a lot about that lately — and on several different levels. I’m coming to realize the effect of what I do on the people around me. One has to be very careful. Do you believe in the power of karma? I mean, how many of us have rattled off at one time or another the old adage, What goes around comes around ? The old pebble-in-the-pond thing. Or it could be a flavor of comeuppance: the bank robber who makes off with the cash, but later has it all stolen from him by another thief. That kind of stuff. Do you believe in it?

Regardless, if karma has anything to do with my recent travails, then I’m a believer. The steps I’ve taken, the series of events I’ve put in motion…they have all — while largely unbeknownst to me — pointed towards Thursday night’s landmark decision. What the “karmatic” effect will be of that, and of the future decisions I make, for that matter, remains to be seen.

Funny thing, though. The very top headline in Yahoo News this morning read, CEOs Without College Degrees. HA. Do I need a PhD to be a good high school choral director? Of course not; I knew that before. But this was like an affirmation of sorts. Karmic. I like that. I think I’ll keep looking for those signs.

OK, here’s your Unbelievably Cute Picture of the Day (I know, biased Grammie here). Justin, taking a nap yesterday, outside on the grass, under a tree in the warm breeze. It was a good day all around. 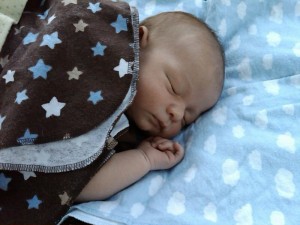