…you’ve read, heard and seen it all…

You know, we hear the term “identity theft” bandied about every day, and I know I probably don’t give it the second and third thoughts I should. You know, “it’s all fine and good until it happens to you.” When I pay my bills online or buy things with my debit or credit card either at the point-of-sale or on the web, I really don’t think about someone getting hold of my personal information and having a vaca or a new car or just plain ripping me off. Maybe I should think about it more often. From a Rolling Stone article I recently read:

Rather than max out people’s credit cards and move on, Esther would become them, spending years living under a succession of assumed names. Posing as various young women, she got her GED in Ohio, aced her SATs in California, gained admission to three universities — including continuing-ed programs at Harvard and Columbia — and received $100,000 in student loans. Along the way, she duped countless people from coast to coast, from DMV clerks to college professors to the West Point cadets she dated.

I know that identity thieves, if not eventually caught, have to give up and at least move on. But this gal seems uncannily talented. Yeesh. Over the years, I’ve talked to people (and not all of them old folks) who believe we should go back to paying for things in cash. And if you want to buy something you can’t afford: wait. Save. How about that? Not sure how realistic that is with the prices of cars and houses being what they are, but I do see the wisdom with regard to consumable goods and the basic “toys” we simply must have. I’ve been as guilty as the next guy on that score. 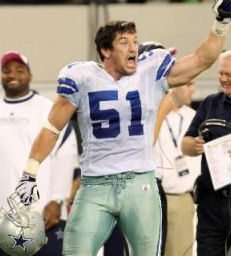 Did you see Keith Brooking’s little rant yesterday? Ah, karma. I read in one of the 5 or 6 post-mortems I scanned this morning that Brookings himself was witnessed exhibiting “run up the score” tactics and showoff mentality on many occasions in the past, both with Dallas and Atlanta. Hmmm. One of the hardest lessons, I think, is to learn to take it as well as dish it out. Can I get an amen?

I think I’ll go see if Jake’s ready for some breakfast. Have a good Monday, fiends…especially those of you who might have to go to w**k.

3 thoughts on “Just when you think…”