And by “deserts,” I don’t mean “an arid expanse of sand-covered land”; nor am I referring to strawberry pies (which, btw, would be spelled “desserts”). Rather, I’m talking about somebody getting what he deserves: his just (righteous and fair) deSERTS (punishments or rewards).

Isn’t English ridiculous? Right, I’m straying off topic. As Holmes and Watson said in the movie the other night: Let’s crack on… 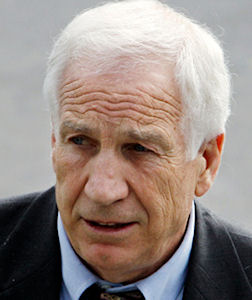 Jer Bear is in serious trouble, that is for sure. Even if he’s found not guilty, he will suffer repercussions for the rest of his life. There are those who would wish (and have done so, publicly and repeatedly) terrible circumstances on him if he goes to prison — of the “being made someone’s concubine” variety. How many times have you seen something to that effect when reading about the conviction and sentencing of a child predator? I hope he gets put in a cell with a psychopathic lifer named Bruno, who…

Many folks want to see the same suffering exacted on the perp as he or she visited upon the children. It’s true that child molesters are vilified more than any other criminal in prisons — which is precisely why Sandusky, if convicted and sentenced, will also be carefully protected. That was an a-ha moment for me, because my first gut reaction was why should he be spared?

According to The Daily Beast, that’s not the way things run, and after reading the article last night, I must say I’m in agreement. Columnist Mansfield Frazier says:

[S]ince prison officials know that sex offenders would be subjected to brutal treatment at the hands of other prisoners if placed in the general population, for years now those inmates have been segregated. For their own safety, they’re placed in correctional institutions with other sex offenders, the aged, and the disabled. Sandusky, if sentenced to prison, would spend all his time . . .with prisoners who perhaps were convicted of crimes even more despicable than those he’s being accused of.

Moreover, regardless of the less-than-stellar reputation that prison wardens are saddled with (primarily due to exaggerations in the movies), most subscribe to the following maxim where their charges are concerned: You are here as punishment, not for punishment. If you ruminate on that, you’ll see the sense in it. What could be worse than going to prison and having one’s most basic freedoms yanked away — in some cases, for a long, long time? Sure, there’s the argument that you get three squares a day, free TV/internet, and free education at taxpayer expense, but really: for someone like Sandusky (and countless others who have families and grandchildren and who enjoy the comforts of a free existence), it’s tantamount to a death sentence.

Of course there are people with no hope, no family, no conscience, or highly dysfunctional lives — or all of the above — who would see prison as a joyride. Every society has those, I reckon. But for otherwise “regular” people who want to do things like go to the store or the casino or the library or church or out for a boat ride with the family? They are miserable, punished and desperate in prison as it is. No need for piling on.

Additionally, there is a legal angle (isn’t there always?) of which prison wardens have to be wary:

Beginning in the early 1990s, prisoners around the country started filing (and in many cases, winning) class-action lawsuits against departments of corrections, directors, and wardens over the conditions of their confinement. And gradually, things behind bars changed. The fact that prison authorities have a duty to protect prisoners is now well established, and no state wants to risk paying out huge sums or having to tie up legal staffers defending such actions.

So, as Frazier states, no warden or prison official in his right mind is going to fail to perform his duty to protect such a notorious prisoner as Sandusky would be. It’s far easier to just do the job by the books, and leave the judging to the judges.

Wise words. And so my mind is changed.

Hey, it’s Monkday — time to visit the school house, where the sound equipment guy is going to come to my classroom and install my new PreSonus StudioLive Digital Mixer. Yaaaaah HOO! A good day to all my wunnerful fiends.