But I really want to know: What are you reading right now? I’ve recently gleaned much pleasure from taking the advice of family and friends on book choices. Always open to suggestions. 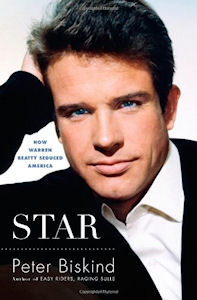 OK, I’ll start and you chime in. The Nook is taking a rest while I actually hold a physical book, and this one’s a doozy at 600-some pages in hardback. I picked it up on sale at B & N the other day, and for a celeb bio, it’s just OK. The title — Star: How Warren Beatty Seduced America — is a bit of a reach, isn’t it? I mean, the guy only made a handful of movies to begin with, and he hasn’t been filmed in almost 20 years. Compare that to his contemporaries of the time: Jack Nicholson, Dustin Hoffman, Woody Allen, Clint Eastwood. Hm.

Of his filmography, I’ve seen Bonnie and Clyde, Reds, Shampoo, Heaven Can Wait, Dick Tracy and Bugsy. I saw his breakout film, Splendor in the Grass, years ago, but I don’t remember much about it other than his character, Bud, being a self-absorbed louse. Compared to what the aforementioned actors have accomplished in the same time span (roughly 50 years), I can’t say that I necessarily agree with Beatty’s alleged seduction of the country. Now, seduction of actresses in the country (and the world) — that’s a totally different kettle of fish. If they had an Olympic event for that, shewww…

Still, it’s fascinating how easily he rose to fame, as if the cosmos directed the ascent. And he was an absolute doll to look at, no arguing that point. The fact that he’s been married to the same woman (actress Annette Bening, his first and only wife) since 1992 is admirable, too, especially by Hollywood standards. All that being said, I was a bit disappointed that there is no insight into his present-day life (this was by design and agreement ahead of time), and several of the key players in Beatty’s prior life would not cooperate. That, to me, gives the book a Kitty Kelley-esque flavor, which isn’t the greatest attribute when you’re writing an authorized bio. At least Beatty himself agreed to be interviewed.

Some facts you might find interesting, providing you are A) a classic film buff of any age, B) over 50, or C) either or both:

I’m only partway through, so I’ll save my final judgment for the last page. I’m enjoying it well enough, until I decide to download the next installment of The Dresden Files.

So…what are you reading? Give us a title and brief commercial. Maybe I’ll end up reading it, too.

5 thoughts on “Just call me Snoopy”