This was a great article. To me, the man summed up the whole professional sports attitude from the 1980s to the present. 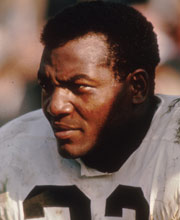 Somebody made the mistake of asking legendary Cleveland Browns running back Jim Brown to expound on a comment he’d recently made about flamboyant (and in the case of this particular interview, African American) NFL players. Said Jim:

“They don’t study and read. If they understood history, they would never shake their butts in the end zone.”

Yikes. But what he said next might make even the most jaded cynic wince:

“To shake your butt is to regress. It’s buffoonery. It’s me-ism. There’s no getting around it–it’s putting gasoline on the fire of stereotypes. When we were growing up in the ’50s and ’60s, we spent every day of our lives fighting stereotypes, all the shucking and jiving and cartoon dancing routines that black people were forced to do.”

He went on to name (some really big) names, and said his piece about them as well.

By all means, ridiculous behavior on the part of professional athletes is not limited to one particular racial sector. Indeed, there are all kinds of schmuckery in pro sports, just like in real life. It was interesting to read about a true sports legend taking a hard-line stance on what the profession has become.

The article is here if you want to read it.