Oh yeah…I gotta see this. I like it that Johnny is not playing Jack Sparrow for once. 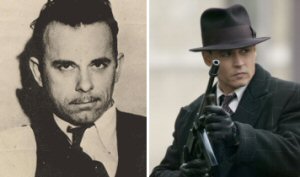 Instead, he’s playing Public Enemy #1: John Dillinger. And according to my research, Mr. Dillinger got a bad rap from the American “justice” system, despite robbing dozens of banks and living like a celebrity.

According to the book, Curious Facts About John Dillinger & J. Edgar Hoover (Kekionga Press, 2008), John was a nice guy who was beaten down early by the legal system; sent to prison for something that should have gotten him probation at the worst.

Along with an older accomplice (an ex-convict who actually got off easy), he tried to rob the neighborhood grocery store in small-town Indiana. It went wrong and the guys ran away with no money. Then, this:

Ed Singleton (who hired a lawyer), even though he had a prior felony conviction and was ten years older than [Dillinger], received a 2-to-14-year sentence and was released after two years. Dillinger [whose parents were told by town police officials that John didn’t need a lawyer] was given 10 to 20 years.

The long sentence Dillinger received for a first-time offense, the betrayal on the part of the authorities, and the light sentence his partner received formed a bitterness in him which grew more intense with every year behind bars. ‘This made a criminal out of Dillinger,’ [then-governor of Indiana Paul] McNutt concluded.”

John Dillinger was actually a polite, nice boy who lived on a farm with his dad and step-mother. [In fact, Dillinger’s great nephew has sued – successfully and often – to preserve his great uncle’s reputation as a gangster, but not a killer. He also, of course, openly cashes in on the use of his uncle’s name, much to the consternation of his critics.]

Possibly more “curious” than the facts about Dillinger in this book are the wacko stories about that schmuck J. Edgar Hoover. Whoa. That’s a post entirely unto itself.

Check out the trailer for Public Enemies: