Big fat ol’ Hershey bar (either in person or through the mail) goes to the winner! Ready?

If you’ve ever seen the movie The Road to Wellville (and I’m not sure I’d recommend it; it’s one of the more bizarre films I’ve seen), you know it’s a send-up of the Kellogg family — namely, John Harvey Kellogg and his wife — and their health spa in Battle Creek, Michigan in the early 1900s. 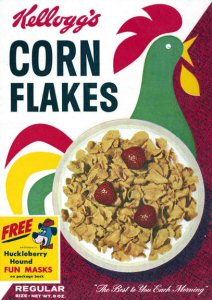 Now if you’re thinking that John was the cereal guy, you’d be partly correct. He experimented with grains, making them into edible breakfast foods for his patients at the spa. Then his brother, Will Keith Kellogg, went to work for John as a bookkeeper — until a huge tiff sent Will packing.

But I’m getting ahead of myself. Strange story regarding how Corn Flakes came about…

Dr. John ran the Battle Creek Sanitarium, where he practiced his beliefs that whole grains and other nutritious foods (not meat, however) would make for a better life. So far, so good. When younger brother Will went to work for him, he (Will) began to experiment in the kitchens for a digestible substitute for bread. According to the W. K. Kellogg Foundation website, here’s what happened:

By accident, he let stand [overnight] a batch of boiled wheat. When he returned the next day, the “tempered” wheat had turned into flakes. From this discovery came Corn Flakes…”

Eureka. They eventually substituted corn for the wheat, and a new food was born. The feud started when Will, seeing dollar signs and marketing campaigns, told his older brother that the new flaking process should be kept secret. John, on the other hand, wouldn’t hear of it, and allowed anyone and everyone to wander through the kitchens to watch the cereal being made.

Why? Because one of the wanderers was a guy named C. W. Post. He was amazed at the process, went off on his own and copied it, and founded the Post Cereal Company, which stood for decades as Kellogg’s main competitor. Yikes. 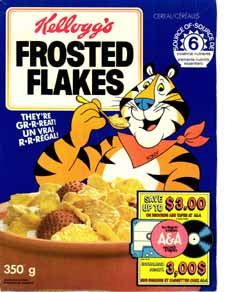 Will got so steamed that he packed his bags and left his brother’s employ. He later went on to form his own cereal company, and the rest is history. Launching out on his own also gave him the freedom to make the other change his brother would never consent to: putting sugar in the corn flakes recipe.

Surely that idea would never work….

But let’s get back to Johnny.

Being strict Seventh Day Adventists, and adhering to the religion’s ideals about optimum health, John and his wife were vegetarians. No problem there. Whatever gets you through the night. But John took things a bit further. He believed:

That said, he did do some good work, too. His biggest push was for government control of tobacco, which he claimed, in 1922, would bring about “the physiological, pathological, nutritional, eugenic, moral, and economic devastation” of the country. His efforts went all the way to Washington, where anti-tobacco legislation was introduced. Obviously, he was unsuccessful in convincing Congress to outlaw cigarettes.

Fink out (to get some Shredded Wheat).