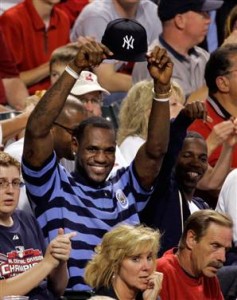 That’s what I said when I went upstairs last night, after giving up on the last four minutes of the Cavs getting smoked (again).

I’ve been reading the sports blogs this morning. People are actually saying that LeBron is playing badly on purpose, or out of sheer apathy. I refuse to believe someone like him would want to lose, or to throw a game because his contract’s up and he wants to leave, possibly to play for the Knicks. In fact, I believe just the opposite: LeBron wants a championship in Cleveland so other teams will fight for him. (Why would he leave though, when Cleveland can pay him the most? Guess it could be more about the wanderlust than the wampum…)

Still, it was depressing. As I got ready for bed, I thought, “Cripes! It’s just basketball. Get over it.” I’m thinking it’s a bit more than that. It’s pulling for a city, not just a team. A city whose river caught on fire one day back in the 70s, and has never lived it down. A city that’s come this close to winning championships before (Indians in the late 90s, Browns in the late 80s), but never quite grabbed the ring. A Rust Belt city whose people deserve a championship. My goodness, I wax poetic this morning. I love me.

Did you know they had to construct a database to keep track of all the NFL players who’ve been arrested? That made me laugh.

What did not make me laugh: Men Who Stare at Goats. OK, I laughed a couple of times.

Gonna be a Weird Wednesday. Hope you enjoy yours!