Have a good time, ’cause it’s all right. (Whooooa yes, my pathetic life is song lyrics.)

It’s all good today. It’s fine that I pulled an all-nighter on Friday night (we had an upset 5-year-old, having a terrible time with growing pains — aching arms and legs), and that Saturday was a mix of getting work done, resting up, and general craziness.

A definite “lowlight” was Pax getting attacked by two pit bull mixes at the dog park yesterday, completely unprovoked. He got a nice little chunk removed from above his eye, and his rear legs are extremely stiff. He now drags himself up off the floor like a seal or walrus in order to walk. We called the vet at 8:00 last night, and she suggested straight Benedryl to relax him until she can work him in this afternoon for a checkup and x-ray. And the hits just keep on comin’…

Before the attack (the offenders are on leashes in the background)

The park owner, who is wonderful and attentive to all visiting dogs, was mortified and apologetic, as the two attackers are his personal pets. He offered to pay the vet bill, and told us that these two particular dogs would be taken inside whenever we’re at the park — exactly the right things to say, and what we were hoping to hear (of course, we wouldn’t stick him with the bill). We felt bad for him. He usually keeps the two pits on leashes when dogs come into the park, until he’s certain that everything is peaceful. We all thought that was the case yesterday, until *bam* — out of nowhere, they went for Pax, who was minding his own business with the other four dogs. The owner and the Thriller immediately jumped into the fray to free him, but not until Pax had been jumped on several times, and bitten who knows how many. He was covered in dirt and saliva, so we bathed him as soon as we got home, looking for any hidden wounds. 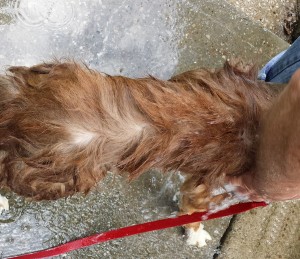 He was already in bad shape when we got him into the car, as he couldn’t make the jump into the back seat, and had to be lifted. And while all this sounds terribly serious, which it surely is, we think he just got janked around, and he’s a middle-aged, underweight dog with joint problems. He’s going to be sore for a while, and he’s back to being quiet and clingy. But that’s OK — we will overcome, and he will heal, and all will be well. But sheesh — in your new home for a week, and you get mugged by thugs. Poor guy!

OK, enough drama for one weekend. I’m off to the school house for my first full five days. Goodbye, voice!

7 thoughts on “It’s all right”