My friend and Finkville citizen Suzanne lives in the Netherlands with her handsome Dutch husband, Harold. She wrote a comment on yesterday’s blog that really brought back some memories. All ye who are geeky and all about this here internet thing, read on. (Those who aren’t can read on as well, what the heck.) 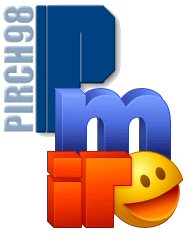 I have met some wonderful friends through a protocol developed in the late 80s/early 90s called Internet Relay Chat – or IRC. Users downloaded mIRC and pIRCch software and used it exclusively to communicate real-time on a daily basis with people from all over the planet. It was instant messaging’s granddaddy. How can I explain it…it was a cult of sorts; a brotherhood, to wit:

Suzanne: So I just blew the dust off my copy of mIRC, and connected to Undernet. Went into our old stomping grounds and found Mahatma & Clotho…whaddya know?? Cool that they’re still together, just like us.

Have a dandy day, everyone.