…yeah, you knew it was coming.

Those of you who are my Facebook friends saw the picture of our new pup yesterday, but for those who aren’t, let’s give it up for Pax, who just upped the ante for the canine team at our house. 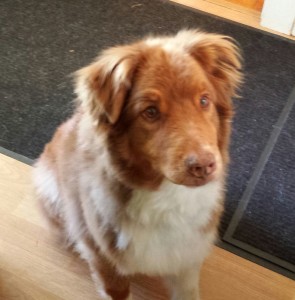 We’ve had a longstanding love for Australian Shepherds, the rock stars of the herding breeds. We adore their intelligence, energy, beauty and loyalty. While Rousseau was an Australian Shepherd/Springer Spaniel  hybrid (here is a completely cool black & white variation of his breed), he favored the Aussie look.

Some interesting facts, if you’re in the mood:

1. Australian Shepherds do not come from Australia. They were likely brought to Australian sheep farms from either Spain or Germany. How exactly they were bred into their current form is unknown.

3. They are particularly prone to hip dysplasia and deafness.

4. The Aussie’s closest relative is the Scottish Collie.

Six-year-old Pax’s owner passed away, and since no family could/would take him, he was remanded to the local shelter. We don’t know how long he languished there (long enough for them to shear off all his matted fur), but he had recently been taken into foster care by a woman who owned two other Aussies. She told us that he appeared depressed, and showed no interest in eating, no matter what she did to coax him. He was not thriving. 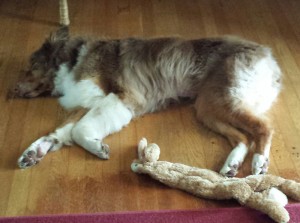 He’s about 7-10 lbs. underweight. His hipbones stick out like doorknobs, and you can easily count the vertebrae in his spine.

The good news is that he’s taken to his new diet (Blue Buffalo with a spoonful of pumpkin puree, twice a day) like a duck to water. He’s eating like a pig. I’m noticing he takes extra care with his hip joints when lying down or getting up; this could be arthritic behavior, or it could be that he’s just skin and bone back there, and lying down hurts after a while. I hope it’s the latter. We have yet to get him in to see the vet for the full Monty check-up.

Last night, we had some moderate-to-slightly-serious “play” fights between Pax and Remy. This morning, we’ve had three play sessions between them, and so far, no flip-outs or ceremonial Dominance Dancing. 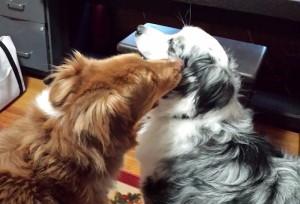 I’ve done one training session with Pax, and he’s another little smarty. He already knew how to sit and lie down, but “stay” was a new concept altogether. When we would go to take Remy out, Pax would have his nose right at the screen door, ready to bolt. He learned the “stay” command in no time. I think we’re on the way to being a family here.

Again, thanks for your concern over the past few days, and all your messages of encouragement. It means the world!

Woo hoo!!! I’m so excited for you! How fun! I can’t wait to get Tootsie a little sister – maybe another golden but I’m thinking beagle or lab retriever this time. Just don’t have the room right now. Aren’t rescue dogs just the best?!?!

Not to be Ms. Know-it-all, but sometimes glucosamine helps with sore joints. See what your vet says for sure. You’re probably right and he’ll feel better once he gets a little meat on his bones.

Ain’t it great? New kids without all that pregnancy and diaper stuff. Congratulations!

Yes, rescue dogs are the greatest! And little beagles wouldn’t take up that much room, right?

We are definitely going to start Pax on glucosamine, as soon as I get back out to Petsmart.

We had another good night last night — this thing just might work!

YAY Pax! YAY Remy!! I think Pax is just the cure for Remy’s issues, sweetie. You and Thriller are the cure for both of them! I’m so happy with your little family. I can’t wait to meet Pax. You’ll have him fattened up in no time at all. I’m so proud of you and Thriller. So much love to give and you both offer it so freely! If I ever become homeless and alone, would you guys take me in?

Your place is the place to be!

I can’t wait for you to have some Pax time, Mave — and he’ll actually come to you when you call him, unlike SOMEONE we know…arrg! I hope all the attention Pax will get at family gatherings might be too much for Remdog to handle, and he’ll simply have to get hisself some of that love. That’s what he does here at home, anyway.

Sure, we’d take you in in a heartbeat — my house would never be so clean. hahahaha <3

Congratulations!!! Pax & Remy will most likely learn to live happily together with your guidance!!

Thanks, Candy — I think you’re right. We’re having fewer dust-ups going into Day 3, and that’s a good sign. And congrats to you on your new Weimy puppy — he’s a doll!

Welcome Pax to the land of Finkdom…you will be loved, doted upon and my guess is it will never be boring!
Play fights already is a great sign…I really believe you will see great changes in Remy.
Happy for the four of you guys…I have only one more thing to say…pumpkin puree?

You guess right, as usual! He’s already among the spoiled-rottenest canines on the planet.

I hope you’re right about Remy and changes — that is the plan going forward, 100%. Thanks, friend!

Oh, and pumpkin? It’s the greatest stuff ever. They both love it, and it’s good for dogs’ overall digestive health, as well as for overweight — something for which Remy is showing an alarming propensity. You should try it on your pups!