Most of the time, war requires preparation. People know it’s coming; oftentimes, it’s a gradual progression to conflict. Not so with 7 December, 1941. For many years after, important people swore it would be the last time the United States would be caught unawares on such a huge scale. That held true until September 2001. 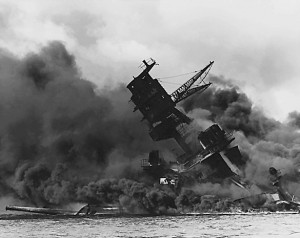 USS Arizona
I remember Dad talking about Pearl Harbor; his contention was that FDR didn’t do enough. Dad always said that Roosevelt knew about the possibility of an attack, but instead of sending a personal envoy to Hawaii to warn them, he was caught up in transmitting telegrams to the Emperor of Japan. I don’t know if that’s true (I don’t subscribe to conspiracy theories, usually), and I haven’t the time to look it up right now, but it seems that even the worst of presidents — and there have been quite a few, from both parties, let’s admit it — would act in the country’s best interest before trying to talk someone out of declaring war.

But that’s just me.

I don’t make light of Pearl Harbor, or trivialize it in any way. I can’t imagine the horror of that morning. Final death toll after the 90-minute attack: 64 Japanese, and 2,386 Americans. War is not funny.

This week has two important historical tragedies; one more tomorrow. But for now, I hit the shower and the snowy road. Christmastime is here, happiness and cheer…

I don’t subscribe to conspiracy theories much either but I can see how an attack like that might be the only way to galvanize the war effort and shut up non-interventionalists. FDR knew we were going to have to fight it at some point and the longer we waited the more difficult it would be. But thats not proof he looked the other way knowing the attack was coming. It is probable though that even if he was unknowing and upset by the attack it was exactly what he needed and maybe wanted. ReplyRat Fink Reply:December 7th, 2010 at 3:05… Read more »

Haha…I have not watched enough to know, but the History Channel being overly fascinated with Hitler sounds about right if thats your meaning.