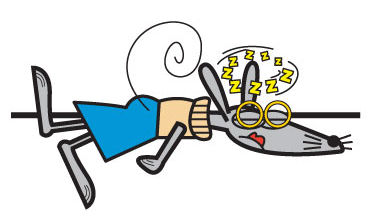 The first full week of school, that is. And while I’m feeling pretty worn out, it’s good. My voice usually takes the brunt of the fatigue, what with singing with shy fifth graders and making demo recordings of various songs for cast members to rehearse at home (most of which are way out of my comfortable vocal range, oy). But thumbs up; we made it through, and I’m excited for the choirs and shows this year.

One of the highlights of my week was going to the Browns/Bears game on Thursday night. What fun! We met up with friends from the Cleveland area who are season ticket holders, and we had a fantastic evening. The weather was perfect: mid-60s, no clouds, and a soft breeze off Lake Erie. Perfect night for football, and of course, stadium hot dogs. (Candid mouth-stuffed photo here.) First Energy Stadium in Cleveland has undergone quite the facelift recently, after being built in 1999 to encourage a heartbroken fan base that had just endured one of the cruelest sucker punches ever pulled. Whether or not Art Modell had legitimate reasons for doing what he did mattered little then, and is inconsequential now. The fact remains: the Browns haven’t been the same since. 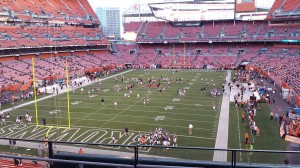 Our view from the upper deck of the Dawg Pound

But back to the stadium renovations. They are spectacular! If you click the “facelift” link in the previous paragraph, you’ll find a graphic that allows you to use your mouse to compare the views before and after the project. I must say, the design is impressive. Our seat location allowed us a great view of all these improvements, as well as the fixes to come. It’s exciting to watch; I just hope the team rises to the occasion.

As darkness fell, the crowd had relaxed considerably, and it was easy to carry on a conversation.

Preseason games are, of course, not well attended. But that was fine with us, as regular season games are pandemonium. During the 10-minute dashes to and from the parking lot, our friends shared their wonder at not feeling like a moving tin of sardines on the sidewalks. Emily kept holding her arms out to her sides as she walked, marveling at the amount of “personal space” she had on the concrete.

Winning didn’t hurt anything, either. (Props to the Thriller, who was likely one of 14.5 Bears fans in the entire stadium.)

And here we are, finally arriving at Saturday morning. We all survived, and I was fine yesterday, despite the three hours of sleep the night before. I’m taking my time, sipping coffee and enjoying 15 open browser tabs of Gothamist articles. Later this afternoon, it’s grocery shopping, cleaning bathrooms and folding laundry. I need this kind of day, because as you know, after Labor Day, yeah…

5 thoughts on “In the books”