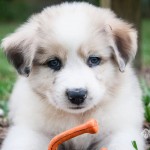 Not the people from Australia (though I’m certain they’re lovely), but rather it’s the Australian Shepherd that gets the press today. 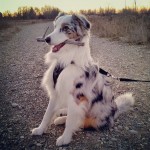 Aussies aren’t really from Australia. They’re American dogs with a murky history involving their association with Basque shepherds who emigrated from Australia to the West Coast during the 19th century. According to the American Kennel Club, they’ve gone by many names: Spanish Shepherd, Pastor Dog, Bob-Tail, Blue Heeler, New Mexican Shepherd, and California Shepherd.

People who love dogs often zero in on one type or breed. Lap dogs, big dogs, shepherd dogs, terriers, retrievers — there are as many reasons for a particular affinity for one pooch as there are pooches in the wide world. I don’t know why we’ve gravitated to the Aussie, but we definitely love their faces, their silky coats, and their silly, quirky ways. In fact, we want more than the two we have, and that could cause some issues down the road. We’re hemmed in where we are, and the house is barely big enough for the four of us. This will take some thought. 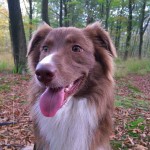 Here’s a red bi-color, identical to our Pax. (Pax has also been called a red tri and a red dilute.) 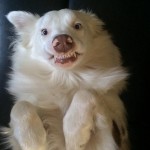 Aussies come in 16 colors. Lucy here is a red merle who’s totally white on her top half.

As members of the herding group, Aussies are extremely alert, intelligent, loyal, and work-oriented. Unlike pups who just want to lie around and be spoiled, Aussies need a job to keep their brains engaged. The dog park for our boys is essential to their sensory workout requirements. They need to run, run, run, every day. Run, sniff, discover, warn, chuck each other, and bark, bark, bark. They love the dog park for this, and we love the fact that they come back exhausted and ready to settle down. They know the drill very well.

The breed has some striking characteristics, not limited to the famous crystal blue eyes. (Both of ours have brown eyes, which we like.) Most popular is the “Aussie smile,” a whimsical mouth-shape phenomenon that delights owners and makes for great photographs. Other fun — although maybe not exclusively Aussie — mannerisms include lying down with crossed front paws and taking complete naps on their backs.

So why do we love Aussies? Well, speaking for myself, I love their coats, their cute faces, their playful nature, the way they “talk” to you, their cuddly behavior, and their overall striking beauty. They turn heads every time we take them out on a walk. 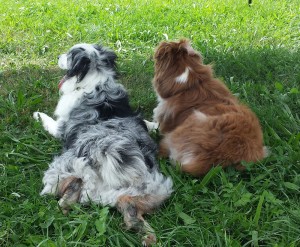 Our boys, taking a breather at the dog park.

We’ve talked about adopting a black tri-color when the time is right (meaning when we get another house on more land). Until then, we’ll enjoy Remy and Pax in their natural habitat: our hearts.

In other news: Mama Fink is done with school for the next two weeks. Time to celebrate around here with family and friends, and by taking on a boarder for the weekend. Oliver is coming to visit, which will likely delight Pax, but send Remy into a tailspin. I’m tellin’ ya, it’s a non-stop party here at the Fink house.