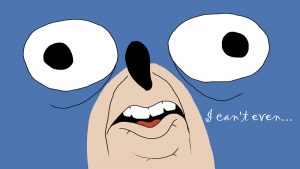 Oh, knock it off already.

I always thought people who took a “social media vacation” were kind of silly. Seriously, either you can handle it or you can’t. Log on or not. Makes no diff, so stop being a big baby about it.

I love social media, as many of you know. The fun banter, the checking in on people, seeing everyone’s pictures, sharing about life events and pets and grandchildren, and commiserating about sports teams — I adore it all. But over the last few weeks, I became, I dunno….sidetracked. By some ghoulish turn, I found myself increasingly drawn to the resultant anger of reading articles about Donald Trump, blog posts about those who would “reform” public education in order to line their own pockets at the expense of kids, and reports of yet another idiot exercising his “2nd Amendment rights” by blowing someone’s head off.

Looking back, I recognize that I was morphing into a slightly different morning routine: Come downstairs, start the coffee, take pups out, grab a mug, sit down at the box, and hit the political articles posted on Facebook. Add to that the new twist of starting school, and I was doing all the above plus hitting the road and dealing with the standard problems of teaching and being a union president. Add to that the slight increase of stress associated with my longtime friend and partner in musical theater going through chemotherapy this fall, and I guess you could say I’d become a pretty grinchy rat over a very short time span. Comparably tiny glitches in the routine were making me bark at people who care about me. It was getting to where I didn’t like me very much.

So…stop. Enough. Back up the truck. Mama needs a cool change.

On 26 August, I deactivated my Facebook profile. And of course I wanted to announce it in a positive light, for two reasons: 1) I hate it when people get all upset in an online forum and announce, “I’m leaving!” Just leave already fuh cripesake, and take your swan song drama with you;  2) however, when my friends found I’d deactivated, some would surely contact me and ask what was up, so I thought I’d head some of that off at the pass. Anyway, that was Friday night. Now it’s Sunday morning. And you know what? 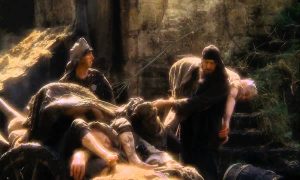 I don’t want to go on the cart.

I’m not dead yet.

I’ll most certainly be back, but I’m thinking maybe after my show closes and the election is over — both of which happen around the same time. Maybe sooner, maybe later. It’ll just depend on my rattitude. I envy people who can juggle all the plates and keep it all together in a manageable balance. Me? I think I was feeding the wrong wolf, and that’s not healthy. When you get up in the morning searching for outrage instead of peace, you’re out of round; cracking the enamel. And that’s where I was headed.

It’s kinda weird, actually: As I write to you, I’m thinking about rehearsals for Addams Family starting tomorrow. But the thoughts are not soaked in dread, as they were a couple weeks ago. Instead, I feel something akin to a healthy fear. haha But it’s good. I’m not allowing myself to read the news sites this morning; I need to munch on something else for breakfast; like peace. Maybe later I’ll catch up on the news of the world, but not now, in the formative minutes of daybreak. I have to frame my morning more carefully, and I get no peace from reading about guns and Trumpkins, say thankya.

So here I am, temporarily quit of social media, and still alive and stuff. I have no idea what happened in American politics overnight, and don’t plan to get one until later. And I’m fine with that. Meantime, I’ll get some school work done and have a chat with the Thriller. Happy Sumday, fiends. Fink out.