Yesterday embodied a true Route 66 experience. As everyone knows, food can really enhance a vacation, but atmosphere can make it. Such was the case in the small towns of Atlanta and Litchfield, Illinois.

As we exited the interstate and kept to the “Old Road,” as all the locals call it, we came upon various little hideaway burgs with old Americana charm, and the food and atmosphere did not disappoint.

We were hungry for lunch, so we stopped at the Palms Grill Cafe in Atlanta. Originally built in the 1940s, it had fallen into disrepair (or was damaged by fire…I can’t remember and don’t have time to research it this morning). Several years ago, someone sank tens of thousands into its restoration. He did a great job. 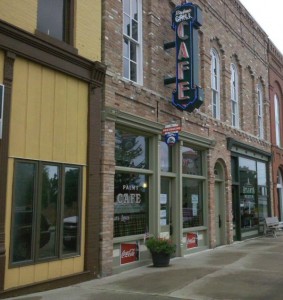 It was great fun to sit at the marble counter and watch as one woman waited all nine tables, with her sons filling drink glasses and bussing. Period signs and neon decorated the walls, and big band music played on a stereo. They served the drinks in those tall, wavy glasses. You know the ones I mean? Very cool. After lunch, it was on to another signature restaurant on the Old Road. The Ariston Cafe was opened in 1935 by a Greek immigrant. It is run today by his son and his wife — both of whom regaled us with tales from the old days. It was delightful. 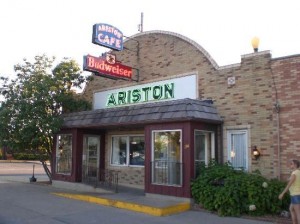 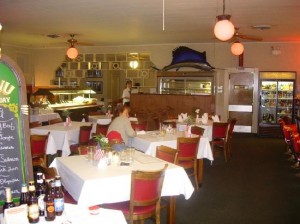 The people were just as charming as the ambience. Fabulous day yesterday, capped off by a couple of fun (and profitable, yay) hours at the Lumiere Casino in St. Louis.

If this is what being on vacation feels like, I think I adore it.

Well, we must fly. We’re leaving the delightful Budget Lodging in a few minutes, trying to outrun a huge thunderstorm, seen here out our room door: 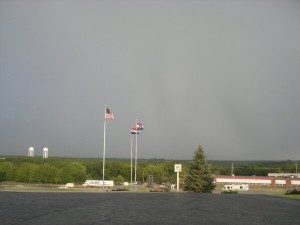 I guess it won’t matter for awhile though, since we’ll be underground at Meramec Caverns, 12 miles down the road. Yay! I’m on vacation.