The sixth of June is famous (and infamous) for three reasons, among others:

From the Fan Day site:

In June 1967, the first global satellite television show, Our World, was broadcast. Nineteen nations were invited to contribute to the show, and the Beatles appeared representing the UK. On that day, 400 million people in 31 countries all around the world listened to “All You Need Is Love” for the first time. 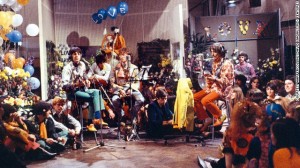 John Lennon wrote the song under the directive from the BBC that it contain a message that everyone around the world could understand. They picked the right band, that’s for sure. And with 1967 being the “Summer of Love,” the message couldn’t have been more culturally appropriate or important. (He did, however, wait until the very last minute to say, “Oh, [the broadcast is] coming up that soon? I guess we’d better write something.”)

The Fabs weren’t the only ones in the studio for the event; it was quite crowded with friends and fellow musicians (Mick Jagger, Eric Clapton, Keith Moon, Graham Nash and others). No politicians or heads of state were allowed to participate. I like that part.

Love is all you need. Yep. Put a flower in your hair and celebrate today.