This morning I was reading the news and saw a link to “Today in History.” It mentioned Gerald Ford, the 38th president and one of only five presidents in US history to have never been elected. He stepped up in 1974 when Nixon resigned, and held office until his loss in the 1976 election. (Funny…he could beat Ronald Reagan, but not Jimmy Carter.) 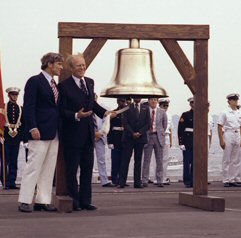 I saw Ford in person on one occasion. I was in Philadelphia on 4 July, 1976 — our nation’s bicentennial. Ford gave a speech (I didn’t hear it) and rang a replica of the Liberty Bell (I didn’t hear that, either). But I saw him from a distance in the parade. It was crazy.

Imagine a bunch of high school students in Philly, on the most important celebration day in the last hundred years, with probably one chaperone to every thirty kids. I don’t remember ever seeing my chaperone until that night. Can you fathom doing that with students today? Wow. Wake up and smell the litigation. (But boy did I have fun…heh.) 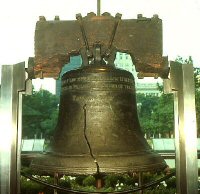 Anyway, looking at this photo got me thinking about the Liberty Bell, which I did see when I was there. Some cursory research at ushistory.org revealed interesting facts about it:

I hear the Mavismobile in the driveway. Time for coffee with sissy. Then it’s dinner with Kay & Bob, and then to the theater to watch Dark Knight. No foolin’.