Am I in a mood this morning? Um, yeah.

Mavis and I were never allowed to shout “Shut up!” when we were kids. I can hear Mother: “Don’t say ‘shut up.’ It’s not nice.”

Well, I’m not feeling very nice today, so I’ma tell somebody to shut up. To Mother, up in heaven: pay no attention to the following. 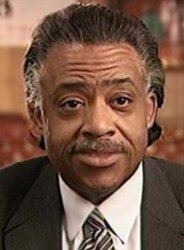 This guy is the adult version of the kid you remember back in school, who tattled on everyone for everything. He’s also got to be the busiest man on the planet. He must do nothing all day but listen to multiple talk shows on radio and television, and read political pundits by the thousands — just to see if anyone made a comment that might be construed as racist.

Mr. Sharpton apparently thinks his fellow African Americans lack the mental fortitude to see that Don Imus is an idiot, and they need Al to intercede for them. If I were African American, I would be completely insulted. I’d wanna backhand Sharpton and tell him to go get a real job. [Yes, we know your ancestors were owned as slaves by the ancestors of Strom Thurmond. Get. Over. It.]

After the thing last year, and then adding on the comments from yesterday, yes, Imus can’t keep his mouth shut. But that’s why God gave us fingers: to change channels on the radio.

I find the inference of his remark disturbing because it plays into stereotypes. We will determine in the next day or so whether or not his remark warrants direct action on our part.”

Direct action? Direct action? Who is this guy? Fuh cripesake, stop worrying about some loudmouth moron on a radio show and focus on some real issues. You want to consider taking direct action because Imus said something you didn’t like? You call yourself an “activist” for African American issues, and you have time for this?

And don’t even get me started on the double standard issue. (“We can say the ‘N’ word and call women ‘hos’ and other filthy names, and openly degrade and exploit black women in music and videos…but only us.”) Where’s the direct action being taken on that score? I mean, honestly. Who says “boo” when black comedians openly ridicule “white people?” I’ve seen it on television a hundred times over the years, from Richard Pryor to Damon Wayans to Chris Rock. They say things like, “White folks do this…” or mimic some uncool, uncoordinated, uninformed and generally irrelevant nerd in reference to white people in general. That’s not a stereotype?

Can you see a white comedian pulling this in the reverse — and still walk away with a career? Feh.

See? You got me started. Look what you did.

Al – shut up. Focus on real problems, as opposed to getting all frothed up over the blatherings of an old man who fried his brain one too many times back in the 60s. He’s not worth your time.

Fink out (of coffee…can ya tell?).