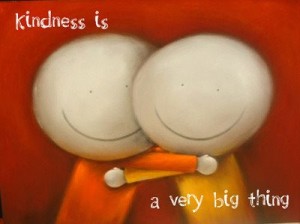 Yeah, there needs to be a set of rules. Or at least a set of suggestions. This isn’t one of those vague, passive-aggressive posts that are so popular on social media right now. It’s just that I’ve observed several situations lately where simple kindness could have spared people hurt feelings, second thoughts about their self-worth, and basic humiliation.

I’m not saying I hit it out of the park all the time — nor do I think people should be smiling robot punching bags for others. I just think there are ways to communicate disagreement or amusement without trashing someone else’s belief system or reality. It really is about balance. Aren’t many things in life?

I try to live by these rules. I hope it’s why, in part, a few people think I’m basically a nice person. Feel free to add to the list.

Those are my ten. Any to add?

5 thoughts on “Rules for kindness”