You know how you read one page, and then find an interesting link, then another, then another? That happened to me yesterday afternoon while I was recuperating from my fabulous visit with Jake (he wears out Grammie’s arms, lemmetellya). He is into everything and loves playing piano from his mommy’s lap. I have been told by my son that I will be Jake’s piano teacher, like it or not. (Actually, I like it.)

But I digress. Back to the subject.

After the kids left, I checked weather.com for the latest on Gustav. I ended up a half an hour later on several sites on the history of hurricanes in the US over the last century or so. Time and again, the hurricane that obliterated Galveston, Texas in 1900 was mentioned. 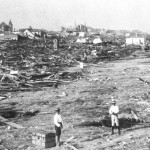 I’d seen a special on the Weather Channel about it a few years ago; the storm still holds the record for the highest casualties of any weather-related disaster in US history. And much of it can be chalked up to plain, old-fashioned human hubris.

The town weather man, Isaac Cline, told residents who insisted a seawall be built to protect Galveston from hurricanes that there was pretty much no way a storm could destroy the city, or even disable it. He dismissed the idea as rubbish, and since he was the resident weather scientist, folks took him at his word.

It would be their undoing.

On 8 September, 1900, Galveston was indeed destroyed by “The Great Storm.” And, as is the case with all hurricanes that make landfall, it wasn’t the wind and rain that did the deed — it was the storm surge. Most of the US cities on the Atlantic coastline are less than 10 feet above sea level, which makes them sitting ducks.

Remember the tsunami back in 2004 that hit Banda Aceh, Indonesia and Phuket, Thailand? A tsunami is a big ol’ storm surge. Check out this home video if you want to see what a few big waves can do to a city:
[quicktime]https://finkweb.org/wp-content/uploads/2008/08/tsunamiphuket.mp4[/quicktime]

You can also see some incredible before-and-after pictures of storm surge damage here.

At least there are early warning systems nowadays that make it almost a certainty that people can evacuate to higher ground and escape the worst.

It is difficult to imagine doing what the citizens of Galveston had to do after their tragedy. With as many as 8,000 dead, cemeteries (which were also flooded, most likely) were out of the question. They ended up gathering up the dead in wagons, putting them on a barge, sailing out a ways, and dumping them in the ocean. 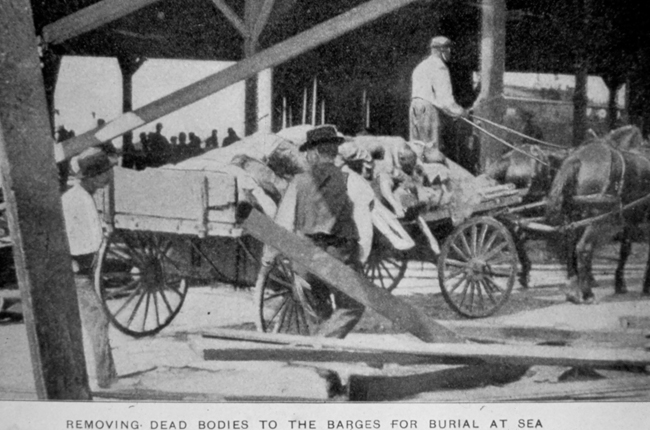