Last night, the Thriller and I sat down for our annual early fall Odyssey planning session. I must say we are slightly excited about the voyage. 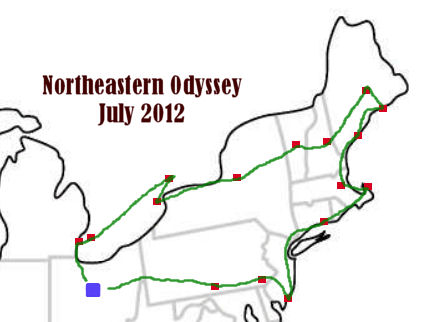 As usual, some things are still tentative, and we plan to make various unmarked stops to see the countryside, eat at out-of-the-way places, shop at farmer’s markets, walk the beaches, and take in an entirely different aspect of American history. It’ll be totally unlike the 66 or National Parks trips. Fun.

And the hoarding of pennies begins again. What struck us as odd about this planning session was the drive times. We’re not accustomed to going from one entire state to another in less than two hours. Heh. It’s a good thing, because we were able to plan bigger, see more, and stay longer at some of the stops.

Two rather large-ish omissions you may have noticed: Boston and New York City. There are reasons. I’ve been to Boston, and truthfully, over the past few years (specifically, 2006-2009) my affinity for the city has dwindled. The Thriller didn’t want to drive in Boston, and I can’t blame him, so…out it went. NYC — that’s going to be a trip of its own someday. As many of you know, I’ve been there lots, but never on a “grownup” trip. It’s always been with my choirs, which is fine and always a hoot, but it limits me to the main tourist attractions. I’d like to go to some jazz clubs and hit the Met and spend a whole day shopping and riding the trains to the other boroughs — things I can’t pull off when I have to be responsible for 80 high school students and 20 other adults.

So, now that next summer has been put in the books, it’s time to put the lid on this one. School starts for me in 12 days. Need to put away childish things and start acting all growed up. Bummer…

Happy day to you, fiends!