I’ve had some lively discussions (or at least I’ve read them) on Facebook before, but nothing like right now on my profile. So I’m late to the RtB dance for this morning. 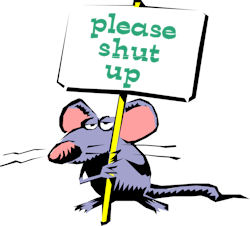 The topic of discussion: my middle school choir concert last night. The kids were wonderful; the crowd, not so much. I felt really terrible for my students and for the members of the audience who were subjected to adults yapping at full volume (think basketball or volleyball game), showing little or no respect for five months of work being presented onstage. It was tragic.

Back in 1999, when I started at my school, concerts were held in the same place they are currently held, except no lighting was used (the main “cafetorium” fluorescents were left on), the choir risers were set up on the floor, not on the stage, and people sat at cafeteria tables instead of on chairs. I thought that was disrespectful to our audiences. I wanted them to have more of an actual concert experience. So I asked my principal if I could set up chairs, unplug the vending machines, use the recessed lights on dimmer switches, and use the Fresnels already in place above the stage. Roger on all of that, and yay, instant concert atmosphere. I think it helped the kids, too.

Though we had some issues with “training” the audience, things basically smoothed out within two concerts. However, last night showed some major regression. It was the first time in my career that I have had to turn to an audience and ask for quiet. No joke. I had to shut a crowd up. I was nice about it (I really wanted to launch into a diatribe, but…), and it helped until I turned around and the choir began performing. Then it was back to business as usual.

And I’m not talking parents not shushing their kids or taking them out in the hall if they got restless (although they didn’t do that, either). I’m talking adults gabbing full-bore like they were at a ball game. I was like, “Wow, some of these people couldn’t care less about what’s going on onstage.” It was quite the disappointment on a night when my kids really came through musically. Bummer.

Oh well…I am determined to deal with it. All suggestions welcome! (But they can’t be felonious.)

Two May gigs down — two to go.

Ay Carrrumba. So sorry – that’s just wrong especially when the kids have worked so hard, and the guilty parties are adult-age. Students at my studio get a stern talking-to just before recitals to remind them to be a good audience by not talking, etc. I actually do it in front of the parents so they get the message too, although it probably isn’t necessary. Anyway, if it happens again, I would not be averse to stopping the choir mid-performance and turning around and addressing the audience once again; reminding them of all the hard work that went into this… Read more »

How about putting a little “insert” into the printed program for every concert/show that you have until the behavior is corrected? Have it say something like: “Tonight’s performance is the culmination of weeks & months of group rehearsals and individual practice. Your sons, daughters, and friends on stage have worked VERY hard – they deserve and appreciate the courtesy of your full attention. Loud chatter or commotion during a concert is disrespectful to those seated around you who DO want to fully enjoy their child’s performance. Unruly behavior by children or carrying on conversations during a concert distracts the performers,… Read more »

Wow. BoomR & PK said it all. I totally agree. I was there last night – what a fiasco. I had one of those “loud people” in the row I was sitting in. I kept giving her my *please-shut-the-heck-up* looks, but it didn’t do any good. It’s a shame when the adults behave badly. I missed two wonderful songs because of them. Those kids were so spot on last night. They sang their hearts out and gave a very professional performance. I was proud of them AND proud of my sister. You’re awesome, Finky. An article in the “Podunk Gazette”… Read more »

Im with PK. I’d stop in the middle and ask them to stop. Hard on you and the kids when you have to start all over and even worse if you have to do it again. But sooner or later they’d get the idea and be quiet or take it elsewhere. Which would also be a shame since they are there (supposedly) to support their child’s hard work and performance. I haven’t been a part of any kind if audience situation (be it a concert like this or going to a movie. etc etc.) in a LONG time and it’s… Read more »

Wow, I remember all that about how things were at the beginning. Really takes me back. Sorry to hear your audience was loud the other night. I agree with PK and BoomR on both of these and if they continue to be disruptive, then you have anyone talking escorted out. Simple as that.

Yep, Will — you were in there on the ground floor. You and the rest of the small-but-mighty group were responsible for getting it all going in the right direction. I heart you all forever for sticking with me through the lean years!

Hey, thanks everyone. Your suggestions are already being put into play. The Plan is in the works. I am going to spend part of my contract day devising it. Yesterday, I promised my middle school choirs that what happened Wednesday would never happen again, if I had anything to do with it (and fortunately, I do). We will prevail! Thanks again, fiends.

Speaking directly to the audience could work–especially if directed pointedly at them–not pleasant but firm! I mentioned this before: free but LIMITED ticketing–each choir kid receives “X” amount of free tickets–the audience numbers will be limited but it may prevent those from well-out of the area from bringing a whole bunch of people who really don’t care about music/concerts/behavior and only look upon a school concert as a social event to gossip with seldom-seen other relatives. Oh yeah, babes in arms count as ticket-holders as well!! THAT should eliminate a few problems!