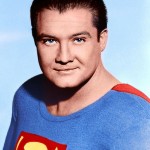 Remember the *original* Superman? George Reeves was his name (pictured at left). I only watched reruns as a kid, because he died before I was born (ok, 2 months before I was born, but still…).

Strange death, too. Some say he was murdered; others say it was suicide. Booze was definitely involved. His blood alcohol level at the time of his shooting death was a staggering .27% (Yeeowza…legal limit is .08%).

Here is a picture of him after he died (courtesy findadeath.com). Although it’s not super-grotesque, don’t click on it if you get all ooky looking at cadavers.

So what really happened to the Man of Steel? Turns out he was rather unhappy at being typecast after Superman was pulled from the air in 1958, but no one around him could believe he would commit suicide because of it. He died three days before a wedding he was very much looking forward to.

The night of the murder/suicide/whatever, he and his fiancee were partying and got a little inebriated. Ok, a lot inebriated (see paragraph 2). George went upstairs to his bedroom, and a shot was heard. When he was discovered on the bed, he’d been shot in the left side of his forehead. Trajectory analysis done much later indicates that it would have been difficult to kill oneself at the angle at which the Luger killed George. Other inconsistencies also existed.

He left no suicide note; he was not despondent or even depressed, according to police reports filed by friends and business acquaintances. He apparently had no reason to off himself. Bizarre. And the world will never know, thanks to the drunken recollections of the party guests (and the fact that most of them, if not all of them, are dead now anyway), and botched evidence at the crime scene.

Ben Affleck actually shone (for once) in his role as Reeves in the 2006 movie about the incident, Hollywoodland.

It’s sad, truly. Guy should have lived a long life and enjoyed a comeback in the 70s or something.