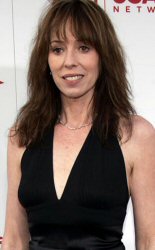 I just don’t get it. How inattentive (or strung out) do you have to be to smuggle heroin and cocaine into LAX and think you’ll get away with it?

Former teen star Mackenzie Phillips was nailed again for dope last night. I talked about her costar, Valerie Bertinelli, a couple of weeks ago. They were both on the 70s sitcom, One Day at a Time. Mackenzie was eventually fired from the show for repeated drug use. Some habits really do die hard…

She is the daughter of the late John Phillips of The Mamas & the Papas fame, who, unfortunately, was also a career druggie. But he was a talented songwriter, too, having written one of my all-time faves of the 60s, “San Francisco (Be Sure to Wear Flowers in Your Hair).” Absolutely great song.

Anyway, Mackenzie is reportedly going back to rehab. I hate that word, rehab. Talk about overused — and for increasingly wackier reasons (can you say David Duchovny?). But honestly, those of us in the real world can’t go to rehab. We deal with it. Who could take six weeks off work at the drop of a hat to “go to the spa and get your health back?”

Truly though, we all have our demons to fight. I wish her the best. But can rehab be addictive?