Happy 2014, my fiends. Hard to believe this is my sixth New Year’s greeting to you. Did any of you who’ve been with me since the get-go (February 2008) think I’d ever last this long? Yeah, me neither.

I make it a habit to revisit my previous NYD posts, linking backwards, all the way to 2009. What I like most is not seeing whether or not I’ve fulfilled every promise or maintained every resolution. Rather, it’s seeing the feedback from readers that bakes, takes and eats the cake for me. My wish for 2014 is to get (and somehow maintain, although I know that will be my job) more conversation going here on a regular basis. That’s my New Year’s Resolution: write more, talk more, listen more, communicate more. Which translates to drink more espresso. Fist pull.

But hey — on to bigger and better this morning…

First, the Thriller surprised me with this on our anniversary last night. Suffice to say it’s much more beautiful in real life. I was speechless. He’s a keeper, even if he didn’t spoil me with pearls and diamonds once in awhile.

Second, we have an update on a situation that’s been occupying our every thought since 30 December at 8:30 a.m.

Since losing our precious Rousseau back in April, we’ve been sort of on the fence about whether or not we’d want to have another dog in the house, simply because neither of us could fathom ever loving another animal as much as we loved him. We’d pretty much sworn off thinking about it, even though the Thriller was still receiving regular email updates from pet rescue sites all over the country. All was well until he sent me an email with a picture of a dog attached. 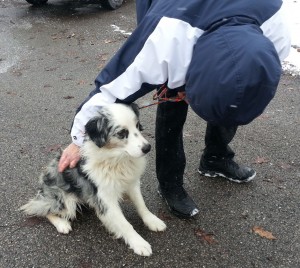 Enter Remington, the pup that will change our lives, providing his owners don’t call to claim him in the next 48 hours. If that happens, we’re trying to be prepared, and we’ll be sad, but we’ll know it just wasn’t in the cards. However, the gal at the rescue (who’s been doing the job for many years) says it is rare that a dog will be reclaimed if the owners don’t contact a local shelter within hours of it going missing. For us, that’s good news, because he’s been there one week today, and they’ve heard nothing. We hope it stays that way.

This is a purebred blue merle Australian Shepherd. If he was a general, happy mutt, we wouldn’t be as suspicious. But he’s not been neutered, and he’s full grown, which suggests several unlovely scenarios. Even so, he’s beyond sweet, very submissive, and beautiful to look at, even though his coat is an absolute mess and he’s filthy. 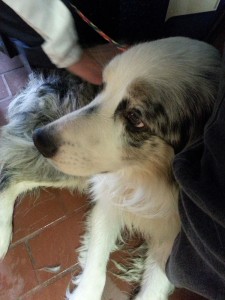 Another telltale sign manifested when we reached out to pet him, and he immediately lay down with his nose between his paws. This little boy’s likely been hit, but lemmetellya, he’ll never be hit again. By anyone. Still, when I sat down on the bench in the reception area, he leaned with all his weight up against my leg and rested his head — just like Rousseau used to do. I think I was a goner at that point…

We were told originally that we couldn’t take him home until after he’d been neutered, and that the first available date for surgery would be Tuesday. That bothered the gal at the rescue (and us, too), because she didn’t want Remy to spend another weekend at the pound, where he is clearly terrified. Trust me, we did not want to leave that place without him yesterday. 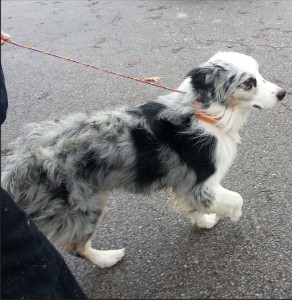 So, the Thriller emailed Trish at the rescue after we got home yesterday, saying if there was any way to expedite the adoption on Friday, we would be amenable. She responded late last night, saying that she had arranged for Remy to be adopted out to us on Friday morning first thing, provided we gave our word that we would schedule the neutering on our own. Wow! Seeing as how the neutering is a condition of adoption, they sure are stepping out in faith on our behalf. But Trish told us it was our story (about losing Rousseau) that really touched her heart, and she “had a feeling” about us being the right choice for Remington.

And that we are. I hope he will grow to love us and our family, and that the training/re-training process goes smoothly.

So that’s the update for now. My hope is that the Youngstown area isn’t so buried in snow on Friday morning that we can’t get through the frozen tundra to pick up this boy. I’m thinking that there’s little that could stop us, though.

I’m so happy for you (and for him, especially!) that I am in tears. The Dalai Lama said that all any creature really wants is to be loved, and I’m sure Mr. Remy will get that at your house. I adopted my first rescue in 1994. When I told the vet her story, she joked that Lady had hit the ‘dog lottery’. I replied that *we* were the lucky ones. I will receive my next batch of rescues on 1/11 (three little kitties who were found inside the engine of a car), so we are a rescue house! Congratulations on… Read more »

A rescue house! That is fantastic. And you’re right — we are the lucky party in this. I hope Remy feels like he can rest and relax and fit right in. I know my family will love him.

I knowed there wuz a reason I liked you from the start.

Hugs and HNY to you, PK!

Remington is beautiful! The first thing I thought about when looking at that picture was the same thing I always thought about Rousseau: “How can you say no to that FACE?!”… ::in a higher-than-normal pitched voice::. I hope all of this works out smoothly for you guys. You deserve a FACE LIKE THAT in your days and nights. He looks soft too — I want to pet him as soon as possible and I will add that to my list of things to accomplish in 2014. I seem to remember reading on Facebook about your training options; it seems like… Read more »

Thanks, Rae — and yes, you need to come pet him in 2014! He just looked so sad and confused and scared in that cage; we’ve been torturing ourselves wondering how abandoned he must feel. But…one day more, and we will take care of that for the rest of his life.

Thanks also for the training link — our hope is that we never need it, but we will be open to any and all possibilities if there’s an issue (emotional, behavioral) that we need to deal with. I’ve bookmarked that site.

Happy New Year, sis and Thriller! Yes, I did indeed think you would keep writing all these years. Your brain is always full of RNF, and you needed an outlet for them. You found it, and we have all benefited from it! Remy. Remington. I can’t tell you enough how much I love that name. He looks absolutely precious. He also looks like he definitely belongs in the Jackson Manse. All three of you are lucky to have found each other. We have a nice sized family with so much love to give him. Remy is going to be my… Read more »

You’ve got to make it over here ASAP after Remy gets home! He is a little sweet face, and he will steal your heart just like Rousseau did. We liked the name Remington because the Thriller said “He looks like he could be a pistol!” haha

He will definitely be your new buddy. Love you sis!

It’s with tears that I respond!!! I love people such as you and Thriller <3 Happy New Year!! Now where are the tissues!!!

Thanks, Candace…and I have a feeling you have an oversized heart as well! I know for a fact you’re a dog lover, and that you treat your Weims like family. That’s “good people” in our book. At this writing, 24 hours remain…I have to say I’m starting to believe this will really happen and that Remy will be happy with us. Keepin’ hope alive!

I always knew you had a terrific heart! Remy is in for the ride of his life and will most surely be the case, bless you and Thriller for years to come. We too are rescue people with Gunner the black lab and Blue the husky/lab/pit bull mix, our 3rd and 4th rescue dogs. We also have an African Grey parrot we rescued about 3 years ago; he was severely abused it was so sad. Liz has loved him back to something close to “normal.” RtB is the very first site I visit every morning with my coffee…am so glad… Read more »

You always knew I was a great big softy, ja? LOL It comes as no surprise that you and Liz are rescuers as well. And this will blow you away, but my cousin in Illinois has an African Grey parrot that’s like 30 years old! He dances and sings and talks…it’s outrageous and funny! I wonder what “close to ‘normal'” means, though. HAaaa Thank you for coming to my little cubicle every morning — it’s this blog’s absolute raison d’être, believe it, and part of my NY’s resolution to write more. If you check the archives of past years, you’ll… Read more »

Yes it’s been a while … When we lost our dear, dear Sloppy the cat, adopting another cat seemed like the worst idea ever– for about a month. Then it made all the sense in the world, and we adopted two rescues, and together they have made all the difference.

Ross…………………… [For those reading these comments, this is my blogging mentor. He’s the Mr. Miyagi to my Daniel LaRusso. He’s a gifted (and published) writer, and a completely cool guy.] Glad to see you back here, mate. And I hear you about re-adopting after losing your pet. The Thriller spent months sifting through dozens and dozens of emails with photos of dog after dog. We even considered driving to South Carolina to pick up two orphaned mixed-breed Aussies who couldn’t stand to be separated. Yay for people who want to rescue these awesome family members. I’m sure you and Mrs.… Read more »

High praise, thank you, although I may be more the sweep-the-leg to your crane.

Sounds like Remy has already won your heart. He certainly is fortunate to be rescued by you and Thriller and to experience the loving home you will give him. I hope the adoption works out and that the weather cooperates on Friday so you can have him in your family.

I also observe that Remy received all the attention in people’s comments while the Thriller’s gift to you received none. Good job Thriller!

Thanks RD and Mave! It is a beautiful ring fo sho, but no worries on the dearth of shout-outs about it. He doesn’t come here very often anyway (I know this because he’ll comment or ask about something, and I’ll say, “Oh yeah, I wrote about that last week.”) Anyway, you’re right RD — Remy walked away with our hearts. It’s 7:15 a.m. on the 2nd right now, and I’ve looked outside at snow, but haven’t checked any news yet. My guess is that Youngstown got it worse with lake effect snow than what we’ve got to the south and… Read more »