Didn’t you say you wanted to know my personal history? No?

Well, here it is anyway.

I was hatched at the brand new Zion-Benton Memorial Hospital in Zion, Illinois, on 25 August, 1959. This is the only picture I could find of the place on the whole big wide huge internet. It’s from a picture post-card, saying, “Welcome to Zion!” [Why a hospital would be on a picture post-card is beyond me. Come to Zion! Stay in the hospital!] Anyway…the facility was built in 1958, sold in 1975, and totally remodeled into one of the Cancer Treatment Centers of America. Cool. 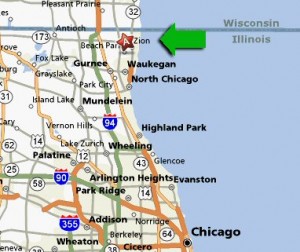 Zion sits at the halfway point between Milwaukee and Chicago, on the Lake Michigan shore, about 45 miles from each city. Just north of Zion, right on the Wisconsin border (although not pictured on this map) is Winthrop Harbor, where both sets of my grandparents lived.

The city of Zion (pop. 22,000, give or take) was founded in 1901 by religious wackjob John Dowie. I mean, the guy was a nut. Really. Many of the streets still have their original biblical names. My Grandma Johnson once lived on Hebron Avenue, and my Grandma Fielder on Gallilee (they both later moved to the Harbor). 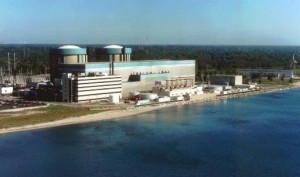 Zion is famous for hosting the nation’s first 1,000-megawatt nuclear power plant. Two reactors were built; the place powered all of Chicago and a good part of northern Illinois. One day, a technician accidentally shut down one of the 2 reactors, and started it back up without performing the required safety procedures. Big hoo-ha ensued, and angry words were spoken. Eventually, the whole place was shut down due to the age of the reactors.

Here is a photo of the power plant a couple of years before the government shut it down. Reminds one of Alcatraz. Ick. 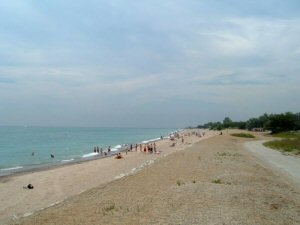 I remember going to Illinois Beach State Park for picnics in the summer. We didn’t go too often, as I remember; my mom didn’t like the sun (y’all think I’m pale as a ghost?), and dads just didn’t take their daughters for a fun day at the beach because they had to work all day, so…

That’s all for now. More on the history of me another day. Maybe the Indians will win today and I’ll feel more like writing.