Good. Because I ain’t.

Anyone who knows me knows I’m an infuriatingly picky eater. I. Don’t. Like. Anything. (Or so my dad used to complain. Man, did I ever make him mad, poor guy. What a rotten kid.) But sorry, I just have an aversion to things that smell like, oh, rotting meat, or maybe the landfill on a 100-degree day (I can hear my friend Lisa laughing from 40 miles away).

On occasion, I have marveled at (and been horrified by) foods from different cultures, knowing of course that what seems grotesque or outlandish to me is perfectly normal to them. Indeed, it’s possible that people in Bangkok would turn up their noses at, say, mashing up boiled potatoes and mixing them with milk or cream; or perhaps the Vietnamese would think it odd to ruin perfectly good tuna fish by dousing it with mayo.

Even farther west: My friend Kay tells me that in Slovenia (part of the former Yugoslavia), they can’t imagine eating any part of a pumpkin. She had to convince a street market vendor that yes, she was actually going to gut this squash and make a pie out of it instead of use it for decoration. He couldn’t believe it. So, “strange” food is definitely contextual.

[Aside: Here is a great site I found for making truly homemade pumpkin pie (and lots of other cool stuff). What say you, Mavis and Helen? Wanna try it this Thanksgiving?]

Then again, labeling foods “weird” or “awful” also falls into the gargantuan category of personal taste. So forget the folks across the pond — I have often been asked by the very person next to me, “What? How can you not like _______?” So at social functions, when offered a helping of pasta salad (*hork*), I’ve learned to just politely say “No thanks, I’ve got plenty on my plate to keep me going for the moment” to avoid feeling like Rudolph at the reindeer games.

Today, I direct your attention to some American foods that are, well, challenging to me. 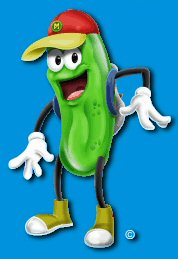 Remember “Freeze Pops” from when you were a kid? These are packaged the same way — you squeeze them out of a thin plastic sleeve. I’m really not sure about this. In order to eat one, you basically need to be ok with drinking pickle juice out of the jar. 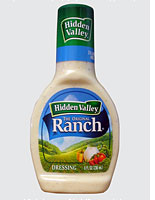 Sure. Get some tasteless iceberg lettuce, a few pieces of shredded carrots and red cabbage, and drown it in oil-based, thick, white glop. Nice.

The “Ranch” craze in the US is equally as baffling to me. It’s consistently been the #1 condiment flavor in this country for years. I know some people who could bathe in it, Homer Simpson style. Buttermilk, mayonnaise and sour cream: those are the basic ingredients. Ugh.

Now I like me the occasional Caesar salad, don’t get me wrong. Cheese is my friend. But I must confess: watching some people eat that ranchy mess is enough to make you swear off food entirely. I’ve never grasped the whole salad-before-dinner thing, either. Who started that anyhow? I haven’t the appetite to research it today.

Um, question? What do people have against their tongues, esophagi, stomachs and colons to inspire them to willingly launch this kind of assault against them? I’ve seen people eat hot sauce, and while clearly in pain and moving about in their chair (as if that’s going to help), mumble “ummph..dat’s amazhing…” Right.

Now I like the burrito experience. When I go to Chipotle, I order one with rice, chicken and lettuce. No red sauce. The meat and rice are nicely seasoned to provide a little “kick” of Mexican flavor. That’s fine. I don’t need to be blasted out of the booth and into the street, thanks all the same.

I know. It’s just me being picky. It’s my job. And this from someone who loves Marshmallow Fluff and Velveeta. Together, on a sandwich.

3 thoughts on “Hey, you gonna eat that?”