Your boys the Rolling Stones are in a movie!

I was on the BBC News site, and saw that director Martin Scorsese (Goodfellas, Casino, Gangs of New York, The Aviator) made a film about the Stones. Well, it’s about time someone did.

Mick Jagger has my basic respect, because he can still sing it. Every time I’ve heard/seen recent concert footage, most of the songs he sang were in the same key as he sang them in forty years ago. Their voices may still be in good shape, but cheese ‘n crackers, look at Keith Richards: 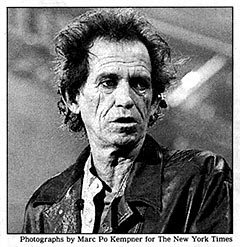 It’s been said that as we age, the face we’re left with is the one we’ve earned. Now I don’t claim that three decades of boozing, snorting, injecting, smoking and debauching would give anyone that “Gee, I feel like I’m not at my freshest today” feeling, but hey – the man looks a bit rough, and this photo was taken in 2002.

I guess I should give the guy a break, though. He and Jagger are both 65 years old and still rocking, so you have to hand it to them. Drummer Charlie Watts is 67.

They still consider themselves “the kids from the other side of the tracks,” compared to the Beatles, who were together only one fourth as long but have secured a more legendary status. And, apparently, that’s ok with Mick. He’s happy to be the bad boy, and probably laughed when writer Tom Wolfe said, “The Beatles want to hold your hand. The Rolling Stones want to burn down your town.” 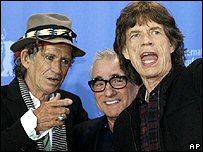 Scorsese (pictured at right with Richards and Jagger) openly admits that the Stones influenced him bigtime in his teenage and early adult years, and that making the movie was a labor of love.

The Stones really didn’t do anything for me in the sixties, although I was a fan of their work in the seventies (“Beast of Burden,” “Miss You,” “Brown Sugar,” “Angie”).

Still, I think I must see this movie when it comes out next month, if for no other reason than to watch Jagger sing “Jumpin’ Jack Flash” for the 25,000th time without appearing to want to leap off a bridge.