Just askin’. Because it’s Saturday, and there should be some relaxing in your future. Yet, I am busy, for good reasons and not-so-good reasons. 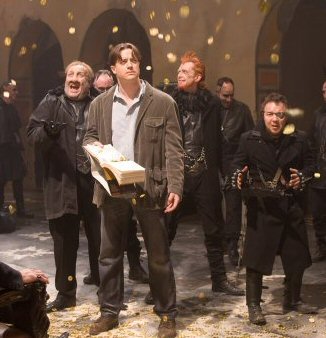 So I read a review on the new Brendan Fraser movie, Inkheart. Critics aren’t too thrilled with it, but it doesn’t matter. I usually don’t much care what critics have to say, as I have often liked movies that they panned. Meh. (But I will admit it is a slippery slope, transferring a book to the screen. You drag along lots of people’s contextual baggage.)

Anyway, I’ve read two of the books in the trilogy (Inkheart and Inkspell). They are very good juvenile fiction. I lost interest after the second one, but I might pick up Inkdeath and add it to the stack of about 14 books that I have to get around to reading.

Last night, I finished the first book in the Twilight series by Stephenie Meyer. I wanted to read it before I saw the movie, which I will rent when it comes out on DVD. I love vampiric stuff, as many of you know, so it was an enjoyable read. I’ll start the next one tonight.

Don’t you just love to read?

Hey, ya think I could borrow the second one when you’re done? I don’t feel like spending $15 at Barnes & Noble to buy it…or putting my name on a list of 73,469 people at the library to check it out. Ha.
Have a fabulous weekend, babe.

Of course, Meg! I have all 4 of them and would be glad to loan them to you when I’m done. I usually take several weeks to get through a book because I only read before turning off my light at night (and I’m usually too tired to last past about 20 minutes), but I gobbled Twilight down an hour at a time!

Soon as I’m done, I’ll bring it to school. You have a relaxing weekend as well.

I’m not a big fan of the Twilight series. The books and the movie are a little too frivolous for my liking.

You mean, like, Coldplay-type frivolous, or just frivolous in general?

Sam…Hun, don’t say that if you haven’t cracked the book open or seen the movie. I thought that as well until I decided to see what all the “hulla balloo” was about. Now I love it.
You are coming to see the movie with me by the way.

Acutally, I have cracked the first book open and I’ve seen the movie. So there.

Sorry guys! I’m going to have to agree with Sam on this one. I read the books to see what the hype was all about, and I didn’t enjoy them at all. :\

I read the Twilight books as they were published. It was nice being a fan before *everyone* was so obsessed… but they’re still pretty good, I think.

I didn’t think you’d be one to like Twilight or Inkheart, honestly. Is Inkdeath out? I didn’t know they’d already translated it.

I really liked it, yes! You’d be surprised at the books I’ve read…let’s see…

All the Artemis Fowl books
The Pendragon books (not all of them, though)
Potter, of course
The Series of Unfortunate Events series
Chronicles of Narnia
A bunch of other juvenile fiction that I can’t remember. I love the stuff!

That’s interesting. I can’t wait for the movie. The actor playing Dustfinger played Chaucer in A Knight’s Tale… I thought he was pretty good in that.

Hey! I remember cooking for you — I’d totally forgotten about that! It’s something I still enjoy. And my stroganoff is #1 son’s all-time fave. When it’s his turn for the birthday feast, I don’t even ask what he wants!

The party was great, and the lasagna and cake were a hit. Jake was a scream; he’s so funny and fun to be around. And hey, I dated one drummer, raised another…why not be Grammie to one more???

Like Skylar, I started the Twilight series before everyone became obsessed. Skylar recommended them to me actually. I loved them. Have you been on stephaniemeyers.com? She has a pdf file of Midnight Sun. It is Twilight from Edward’s point of view.

No Krissy, I haven’t but I’ll check it out for sure. All I know is that I’m staying up way too late reading this novel!