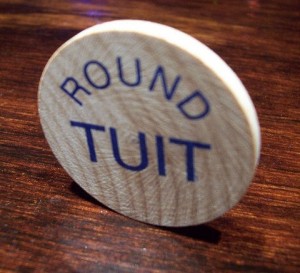 Grandma Johnson had one of these on her refrigerator in magnet form, and as a young kid, I remember figuring it out by reading it aloud. I thought it was clever, and it reminded me of the dozens upon dozens of times I’d heard my parents or grandparents utter its associated phrase: I’ll do it when I get around to it. Well, here’s your “round tuit.” Silly grownups.

Several books are on my “round tuit” list, and last night I took the first one off the pile. I must say I never realized how much we women owe to Nellie Bly.

Born Elizabeth Cochran in 1864, she lived a decent early childhood until her father passed away, leaving no will for his many children, and therefore rendering the family unable to lay claim to his estate. She tried odd jobs and school to try to help her mother provide for the kids, and they all ended up in Pittsburgh, where they ran a boarding house.

It was there that Nellie read an op-ed in the Pittsburgh Dispatch by columnist (and typical 19th-century chauvinist pig) Erasmus Wilson, who wondered why women were trying to get into the work force and establish careers, when clearly, a woman’s place was cleaning, cooking, reproducing, and generally not worrying themselves with cogent thought. What were they on about anyway? All they were doing was cluttering up the workforce and making things difficult for men.

Eighteen-year-old Nellie was having none of it, and wrote an articulate and compendious rebuttal, which, while written respectfully and without snipery, drove the point right between the old geezer’s beady eyes. (You can read portions of it here, about halfway down the page.) As a result, the paper’s editor went searching for her and hired her on the spot to write for him. It was on. 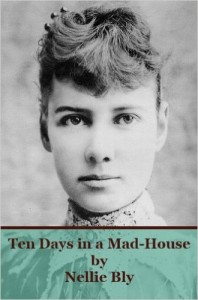 So, to get around to my round tuit: I finally got around to starting Ten Days in a Mad-House, the first-person account of Nellie’s groundbreaking undercover stint in the Blackwell’s Island Insane Asylum, posing as a nutter in order to write about conditions there. (You can read it for free here — fist pull for classics in the public domain.) I’m halfway through the short book, but already horrified at what was allowed to happen to not only the poor, unfortunate souls who needed psychological help, but also to perfectly sane women who were simply down on their luck, sick, or alone and unable to make ends meet.

Sidebar: I have a recurring nightmare (not often, but more than once), in which I am being dragged away to the nuthouse, and though I know I’m completely sane, every argument I try to pose to my captors falls on deaf ears. The more I insist I am normal, the more they smile benignly, nod their heads, and continue to drag me to the padded room. It’s terrifying. Am I mental? Yikes…

Investigative journalism got a tremendous shot in the arm after this book went to print. Nellie was not only a pioneer in that field, but she went on to enjoy an adventurous career in travel, making the round trip from Hoboken in 72 days, thus breaking the record set by the fictitious Phileas Fogg in Jules Verne’s novel, Around the World in 80 Days.

She married old (but well) and died young, doing what she loved: writing. While short, it was a life satisfyingly lived, and I aspire to do the same. Don’t we all?

And with that, work begins. Much to do in preparation for Monday. But first — the rest of the week is the Js, the A’s, and the Thriller. Score one for my last weekend of freedom.

Happy day to you, fiends, and whatever you’ve got to do, get a round tuit.

(PS — I know we still have a problem with the bizarre extra column throwing comments up from a previous post. Some file or code is corrupt somewhere. Sunny and I are on the case.)

7 thoughts on “Here’s your round tuit”