I call it Syringe Wars.

The steroid scandal that slammed full-force into professional sports has once again surfaced in the news.

This time it’s Tammy Thomas, ex-professional cyclist, convicted yesterday of lying to a grand jury about her steroid use. 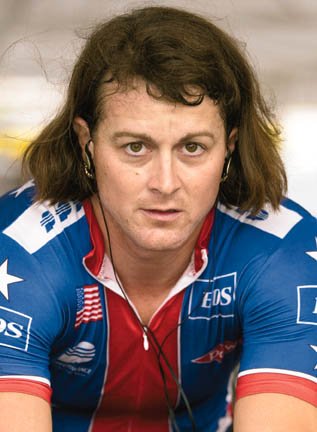 She denied ever using steroids. Friends, if this is the face of a woman who never shot up male hormones, I am Christ on a pony.

I suppose that people can be born to look this way, but I’d like to see her before she began her cycling career – which, by the way, was stripped from her for life.

And she blamed the jury and the prosecutor for “destroy[ing] people’s lives.”

Nah, I’d say she made that choice all on her own.

See, what gets me is not that people shoot up steroids. Folks can (and do) put whatever they want into their bodies, for myriad reasons. What cheeses me the most is when people screw up, then blame others.

A second cheese-off is the fact that such harsh punishment is doled out to these athletes, with more to come in the future (are you paying attention, Barry and Roger?), while criminals who hurt people other than themselves get slaps on the wrist. Drug dealers go free because prisons are overcrowded. Idiots like Ray Lewis serve 12 months probation for murder. People who beat their wives and children get a finger-wagging from the judge and are told to attend some bogus class.

To me, those are the real perps.

Why aren’t we dragging people to court for smoking cigarettes? I mean, the jig is up on tobacco – it’ll kill you sure as you’re sitting there reading this. But steroids? Oh wait…we’re dealing with professional sports <<insert angel chorus and beam of light from heaven here>> , so by God that’s serious business. We have to stop doping in sports!

No. We have to stop being dopes, paying top-dollar for sporting events and making it so one individual athlete makes more in one year than the entire economies of some third-world countries.

Ok, rant over for now. I’m happy there’s Dunkin’ Donuts coffee in my house. Shame on The Thriller for turning me on to it, ‘cuz it’s like $8 a pound.

Have a great weekend, everyone!