The weekend, I mean. Actually, the last four days have flown by. Wish I could have some of it back. But then we wouldn’t be closer to the end of school, now would we? I hope everyone enjoyed Mothers Day, whether functioning as a mom, a child, or both. 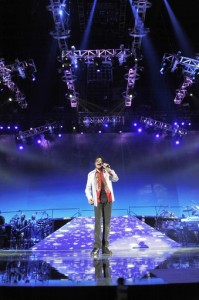 Last night, after the decidedly disappointing Cavaliers game (why a 6′ 1″ Celtics player was allowed to get 18 solo rebounds, I’ll never know), I watched one of my Mom’s Day gifts — This is It, the Michael Jackson movie. Impressive. He really still had most of his moves at 50, although the Thriller and I both noticed that a bit of the pizazz had mellowed. I know I couldn’t have kept up, though.

What struck me was how he got what he wanted out of the band, the singers and the dancers without once exhibiting “diva” behavior. I like that in an artist. The fact that everyone, including his director, was absolutely sycophantic in their admiration and devotion to him probably made it unnecessary, admittedly. Still, it was a pleasure to watch how what was in his brain translated to the stage. Watching the interviews with the dancers at the beginning showed what an impact MJ had on millions. There has never been anyone like him, like him or not.

Time to get back to reality, however. Performances coming up…

Did everyone have a lovely weekend?

4 thoughts on “Here and gone”