It’s a pumpkin pie inside chocolate cake and an apple pie inside yellow cake, all held together with a lot — we’re talking inches — of vanilla buttercream frosting. I actually joked about it in an email to the family yesterday, asking if anyone dared Mavis and me to make one of these monstrosities for Thanksgiving. 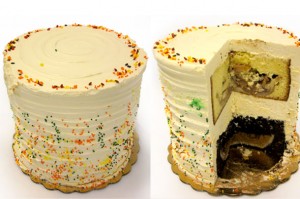 Well, after reading some reviews about it, I think we should probably pass. Besides, at 1800 calories per slice, our pancreases will thank us.

Here’s something fun, though, and something anyone could do at home for gifts. Chocomize has come up with the really personalized chocolate bar. I like that idea. Why didn’t I think of this? They’re turning a profit after only four months in business. That ain’t right.

Still, I might have to consider this as a gift idea for my fiends this Christmas. Anyone willing to put in an order? I’ll be yer huckleberry.

On the health front: I’m coughing a bit less. That is a good thing. Last night, I watched Sweeney Todd while camping out on the couch. “Epiphany” has to be one of the top five numbers I’ve ever seen in a musical — live or on film. Johnny Depp was simply brilliant. (And I don’t say that just because I heart him. Well…OK that’s partially why.)

Happy Salterday – I hope you’re doing something fun. Me? Not so much. But tomorrow is going to be classic. Bring on the birthday feasts…