We did laugh. Young Frankenstein was worth every penny — even worth the ridiculous traffic via the detour in downtown Cleveland (I-71/I-90 was closed going in and out, if you can imagine). 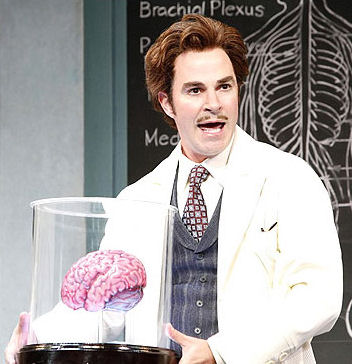 I’m not saying it was a one-man show, but I will say that there could be no understudy for Roger Bart if he fell ill. I’d want my money back. The man was born to play this role. What fun! And the nuances that one infuses into a role after two years of playing it six nights a week cannot be overstated. You could just tell he was Frederick Frankenstein.

The supporting cast were fine — Igor and Frau Blucher were hilarious — but nothing really outshone Bart.That was fine with me.

The audience giggled in anticipation of the “What knockers!” and “Puttin’ on the Ritz” lines. And there was a really funny (albeit a trifle uncomfortable) moment when Bart forgot a line, and Igor had to lapse into improvisation. It ended up quite the cool thing, though: they sort of let the audience in on the private joke at one point during the exchange, when Bart said something like, “I’m not really sure what I should say to that…” Funny.

The set was impressive, as is expected for a high-budget show from Broadway. Two ladies were seated next to us (we had fantastic seats — middle of orchestra, middle of row), and one of them shared a story about opening night last Wednesday or whenever it was. Turns out the trucks with the sets didn’t even arrive at the theater until 7:15 p.m. — 45 minutes before curtain. I guess the show started hours late. They wouldn’t let people into the theater until way after the normal time. I didn’t hear the end of the story, but I’m assuming that everything worked and nobody died, so it was all good. 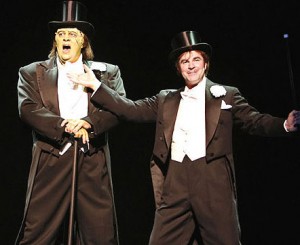 And of course, the “Creature” was hysterical. I think it’s good that Shuler Hensley was so “made up” for this role, he was basically unrecognizable. I remember thinking when Peter Boyle was cast as the dad in the sitcom Everybody Loves Raymond years ago, all I could think of when I saw him was, “He’s the monster from Young Frankenstein (seen here with a young Gene Hackman).”

I say go see it if it comes to a town near you. It was great fun, and typical Mel Brooks: silly, naughty, big production numbers, tons of double entendres, and really funny/quirky song lyrics.

It was a fabulous night away from the realities of our lives (we both have homework sucking the life out of us now). And check out the desserts we boxed up and brought home from Longhorn Steakhouse because we were too stuffed to even attempt more than a couple of bites: 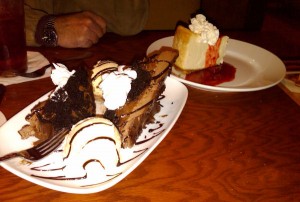 Death on a plate. Now that’s the ticket.

Have a great Sunday — I’m off to get donuts, pick up Mavis, and go see the grandsons for awhile. Then it’s time for dreaded homework I’ve been putting off for days. Delightful.

Oh, by the way — while I was swiping pictures from broadwayworld.com, I noticed a collection of reviews from the new Broadway revival of Bye Bye Birdie. Not so good. Yikes.