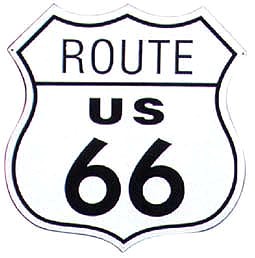 Remember that song? It winds from Chicago to L.A….

More importantly, do you remember traveling on Route 66? Having been raised near Chicago, I’ve been on it, I’m sure, but I don’t remember. It would have been in my childhood.

Anyway, as usual, I went a mile deep into a link forest and found the most wonderful sites about this historic roadway, and what it meant to American travelers from 1927 until the late 60s. According to Wikipedia, the highway was decommissioned (shut down and removed from US maps) in 1985, to make room for the interstate highway system. Recently, thanks to a huge effort by preservationists, Route 66 signs are beginning to appear not only on the roadway itself, but on maps as “Historic Route 66.” Nice.

The coolest thing about Route 66 is its nearly endless parade of fabulous vintage diners, gas stations, motels and mu

seums that dot the landscape between Chicago and Los Angeles, where the road officially ends. Check this out – I want to stay in the Wig-Wam Motel, in Rialto, California (click on the picture for a larger view). Is that great or what?? There are pictures of the interiors as well – just 2 beds and a bathroom, with a little window air conditioner and small TV. $40 a night – can you beat it? Don’t think so. You can also bank on repeated sightings of Muffler Men. Eww.

The list of links to sites about Route 66 can keep you busy for hours. Too bad I have to finish a paper for class, and get ready to go to teacher inservice. Yippy. 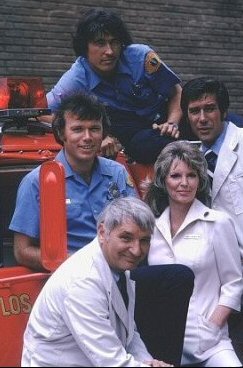 And back for a minute to the song, “Route 66.” It was written by Bobby Troup – the older guy at the bottom of this photo. Remember him? He played Dr. Joe Early on the 1970s drama, Emergency. His wife (singer/actress Julie London) was on the show, too. She played nurse Dixie McCall. I was in love with Randolph Mantooth (top of the picture), who played EMT John Gage. Didn’t we all think he was completely dreamy? Didn’t you?