When I got to the end of 2018 (specifically, Christmas Eve), I thought, OK. I made it. One year without the Thriller. A year of grieving and learning, and learning to grieve. The day after Christmas, I woke up and took Remy out, stood on the back porch and breathed the cold air. It was a new day; a new era for me. Time to concentrate on being the best me I could be, because that’s what Michael would want.

Then, three days later, I heard that Lisa, my dear friend and partner in crimes against musical theater for the past 19 years, was having a bad week. So I texted her: 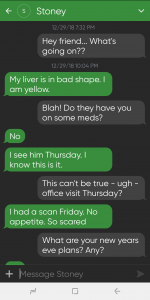 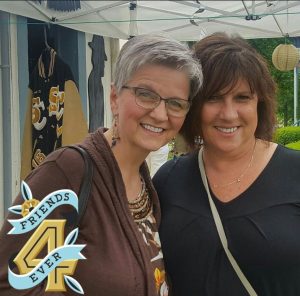 New Year’s Eve was the Thriller’s and my wedding anniversary. I thought, rather than sit at home and feel sorry for myself, I’d go spend some quality time with my good friend Stoney, since she had no plans.

When I got there, her friend and caregiver answered the door — not Lisa herself. Red flags went up in my mind. She was in bed, unable and unwilling to get up. So I went upstairs, lay in her bed with her, and we laughed and had a nice conversation, although something looked strangely familiar. The only way I can describe it is that there was nothing behind her eyes. Michael had that look as well, when the disease started to overtake his brain as well as his liver and lungs. Dread crept into my heart; I knew, lying there next to her, looking at silly pictures on my phone and making her laugh, that this was the last time I would ever be with her in this world. 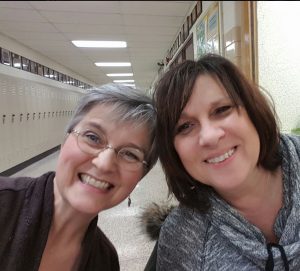 On New Year’s Day, she worsened, and then was transported to the hospital, then to a Hospice facility. It all happened so fast. Yesterday morning, she died. She fought metastatic breast cancer for over 20 years, and just kept beating it back. I’m angry that most times, eventually, cancer wins.

Still…I have fantastic memories of a two-decade friendship that brought a ton of laughter, fun, learning and sweetness to my life. Not that we didn’t have struggles, especially in rehearsals. Oh my, the stories I could tell — one of the most famous being during (insert show here — I have no recollection) rehearsal one evening, when she’d had enough with lackluster acting efforts onstage. 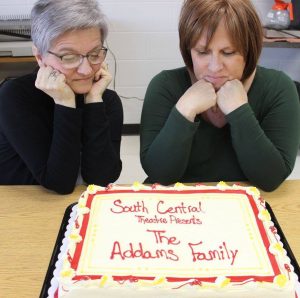 We each took turns, it seemed, ranting and raving at our casts to sing out/identify with their character/follow through/remember choreography/try harder/commune with their audience/give a dang, etc. Well, this was her night to go off the rails, and during the tirade, she threw the pencil she was holding — and it hit me right in the face. Ow!! The best part was watching the cast — silent onstage, taking their medicine — trying to decide whether or not to react. Priceless. (Of course, when Stoney laughed and apologized, the tension released and everyone had a laugh at my expense – including me.)

When it was my turn to lose my mind, she found it difficult to not laugh. So she’d look intently at her script and pretend (badly) to take notes or read while I ranted, with the cast totally seeing what was going on, but not daring to smile or react. God love ’em…I respect that. hahahaha

I could write all day about the times we sat in my room or hers, often with a small pizza to share before rehearsals, and talked about life and love and just stuff in general. We shared secrets, dished dirt, laughed (oh my, did we laugh), and talked musical theater for forever. Her love for it was as strong as mine has ever been. The reason it exists at our school traces back to early 2000, when she asked me if I might help her with the music part of a show she wanted to do (Bye Bye Birdie). I said sure, why not? From that day, we were pretty much inseparable.

We drove each other crazy on occasion, and had a couple verbal knock-down-drag-outs, but always hugged and apologized in the end. She was a sweet soul, so undeserving of the beating she took over the years with this hideous disease. I will love and miss her forever.

Of course, she would tell me that hey, the show goes on, no matter what. So I will put on the tap shoes later on this afternoon and start choreographing the production number for the show in March that will be performed entirely in her honor.

Life — as sucky as it sometimes is — goes on, despite the crushing heartbreak of losing a loved one. I’m sure you’ve known that sadness. But, as the Thriller used to say: Onward through the fog! I can’t see what’s next, but one foot goes in front of the other, regardless. Stoney would want it that way, too. I see them both up in heaven, having a laugh at my silliness.