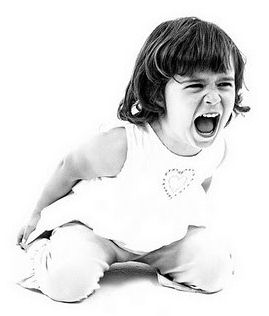 What does this entail, you ask? Oh, nothing much, other than dumping out drawers, frantically pawing books off the shelves onto the floor, sweeping the surface of the desk with my arm, and flinging across the room two full pails of pens, pencils, flash drives, Post-It Notes and markers. Office Tornado. Parlor Cyclone. Massteria.

The Thriller, downstairs in his office, thought I was using Rousseau as a bowling ball. (Truth is, poor Rousseau was cowering under the dining room table.)

Why did I do this, you ask? Well…I couldn’t find something.

I know, I know. That’s ridiculous. Tear apart your parlor because you can’t find a piece of paper or whatever it was that went missing. It’s nuts, and a major character flaw. I used to clear my dresser in this fashion when I got mad. Jewelry box, framed photos, loose change, alarm clock, lamp…schlinnnnng!…away it all went. Actually, it was somewhat therapeutic, in a completely Outer Limits, beyond-screwed-up way. I’ll stop short of suggesting you try it. 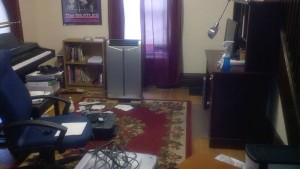 After cleaning off the desk, picking up 3,000 papers, and putting the books back

Anyway, the Thriller takes these occasional tirades as a cry for help, and once again, he came to my rescue. He suggested — as he did four years ago around this time (dear God, I’m a hoarder) — a cleansing of the room. You know, kind of a demolition and rebuilding project. And since the demolition had already taken place, he was well on his way. So I decided, halfway during the cleanup phase, to photo-chronicle the transformation.

He went to Wally and bought one of those Rubbermaid stacked-up drawer units, so I wouldn’t have to smash all my office supplies in one desk drawer and two little cubbies in the hutch. Then he brought up an oak desk (no easy task) from his office and put it in the corner so I’d have a little more storage and a place for my printer that wasn’t the top of my space heater. He brought order to my chaos, calmly and happily, without once threatening to Baker Act me. 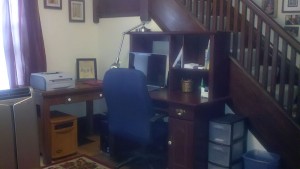 And then there was peace.

He was so inspired by his magic trick in my parlor, he went down to his office and committed the same neatness crime in his own space.

And now that the transformation has taken place, all is in order and I am calm. There’s the whole issue of not getting ANYTHING on the list done yesterday, but hey, there’s always today and tomorrow and tomorrow, right?

Welp, we’re off to the veterinary opthalmologist in Akron today. (Apparently, there is such a thing.) Gotta get Pup’s eye taken care of. Then it’s back in time for cake decorating class. I must admit I’m really starting to like this “act like you’re retired” thing…

Have a great day!

It looks great!! You really needed that desk and the storage bins. Neat and orderly works every time.

Let us know what the Vet says about Pup!!

It’s definitely nice to have order once again! I usually have a total breakdown every few years…my goal is to stretch this one to five or six before the next blowup. HA

We’ll keep you updated on what’s going on with Old Man Bones!

It was kinda cute…as long as one stayed out of the direct line of fire! Now I know where the term “mad as a wet hen” came from. You really embraced the “let’s clean everything in sight,” solution. Seemed therapeutic for us both. It was actually fun for me. You?

Actually, once we got into the project, it was a flavor of “fun.” Not unadulterated, flat-out fun, mind…just, you know, fun. Regardless, I’m glad it’s done; now onto the sixty other projects that need tackled around this place!

Garsh I thought that kind of drama only happened on TV. I’ve never had a hissy-fit of that extreme-i-tudiness mainly because I would hate the clean-up. Nice of The Gloved One to come to the rescue.

XOXO keep it light til the chaos begins! Hope all is well with hondie-sseau

I know, isn’t it ridiculo? Terrible behavior. I can’t explain it…sometimes I feel like my brain will explode if I don’t do something crazy. It’s like I want to punch myself in the head a hundred times. LOL

Am I inching up on a definition of psychopathy???

I have never EVER done that. Nope, not me…. ummm. nope….uhhh… hmmm.

Yeah, you know that’s why we love each other.

Super glad all of this had a productive outcome–order restored. BTW, did you find what you were looking for?

HA — yes I did (it was a piece of paper that contained SKU numbers of some of the Thriller’s jewelry pieces), but I didn’t even remember that was what I was looking for during the actual hurricane. I know, that makes no sense. I need therapy.

Did you throw a pencil or two? That always helps!

At least none of them hit me in the HEAD *coughSTONEYcough*