Hey, check these for Halloween: 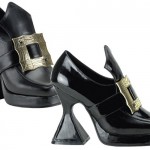 And these give new meaning to the term en pointe: 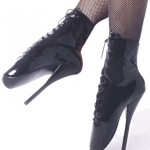 I think those would be comfortable after my standard 15-hour day, don’t you?

So I read yesterday that Jose Canseco is now sorry he wrote Juiced. He apologized on an A & E special, saying that had he known his name-dropping was going to hurt people’s careers, he wouldn’t have done it. (?????)

At one point in the television program, Canseco is shown at an appointment with a Santa Monica physician asking to be weaned off steroids for good to restore his testosterone levels.

‘My body forgot how to make testosterone,’ Canseco said, according to the Daily News. ‘Steroids and the use of steroids destroyed my life completely.'”

Ok, he was angry at MLB when he wrote the book. He lashed out at them, and at others. But hello…there is a considerable block of time between writing a manuscript and receiving completed shipment from the printer. There are no innocent accidents in publishing, at least where major content is concerned. In fact, in a New York Times interview in 1997, Canseco’s ghostwriter said:

I can now reveal that serious thought was given to including Canseco’s recollections of golf course conversations with Clemens about steroids. At the time, we decided to focus on players Canseco injected — since those revelations would carry the maximum impact.”

So yeah. This wasn’t a stream-of-consciousness rant that was printed overnight. Apparently, a lot of thought went into it. Sorry, Jose…I ain’t buyin’ it. (The story or the book.)

In the TV special, he also talked of living paycheck to paycheck. Cynical minds would think, “Hmm; can’t afford to keep up his habit, so he’s going public again, doing teary interviews, selling more copies of Juiced to the curious, boxing other has-beens on cable, and purporting to serve as a warning beacon to young athletes.” But maybe that’s not it. My hope is that he wants to kick the steroids for real and for good.

But I’m not banking on it.