No, I’m not giving away warriors or infectious computer programs or, um…those other things.

Last night, while reading/researching, I ran into the word no fewer than three times. This, I surmised, was a sign: time to free-associate about trojans. [OK, I’m not *really* free-associating, but…you know.]

You hear the word “trojan” a lot; many times in connection with computer issues. There are three definitions one must keep separate in the virus/trojan/worm game, however (squeaky-clean, freshly-manicured Mac users, you can skip this section, although the Mighty Blue Apple has been known to get the occasional worm): 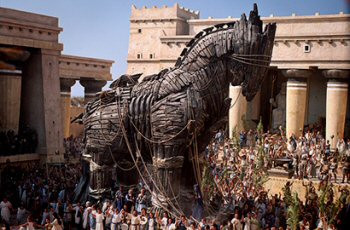 There are lots of schools that feature a Trojan warrior as their mascot. My school does. But I wonder how many people, when they think of a Trojan, first think about how the citizens of Troy got their collective butts kicked via the ultimate humiliation of the Trojan horse joke.

I would imagine a person’s first thought upon learning of the ruse dreamed up by Odysseus would be, What a buncha wankers. Well, if the knee-high strappy sandal fits…

They really bought it, lock and stock. Amazing. Different culture then, though. And really, how do we know Virgil didn’t make it all up? But still, I have to wonder when I see athletic teams called “Trojans” — why did they choose that mascot? I’m sure there were brave and powerful Trojan soldiers. But that’s not really their claim to fame.

Thus ends my Trojan association, but not my fondness for all things old. Take today, for instance. Tis a special day indeed. Behold the email I received from my fiend PK:

I’m going to start quoting you on paragraph six.

I would like to take a moment to really give the word “behoovith” its due. Quite possibly one of the best words I have seen/heard used in the past year. My high school mascot was the Spartans, with the Findlay Trojans as our rivals, and we always used that ancient idea of Greek cunning in pep rallies and such. And, by the way, I had already looked into ordering Heavy Action (MNF Theme) for next year in a show. How bout dat?! Methinks thou mightst thinketh in smiliar fashions. ReplyRat Fink Reply:April 23rd, 2009 at 9:40 amYay! Thou hast one… Read more »

Ok, its not a word…but…well enough said.

I can’t get past “knee-high strappy sandal fits…”